Language study in the desas of Suriname 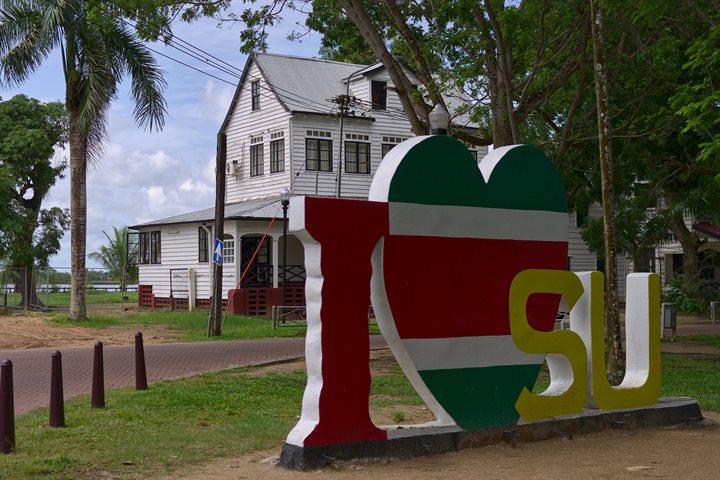 Surinamese Javanese has been spoken for more than a century in Suriname. Not only the vocabulary, but also the grammar is different from the Javanese in Indonesia. Both Sranantongo and Dutch have shaped this language, as shown by the PhD research of Sophie Villerius.

When slavery was abolished in Suriname at the end of the nineteenth century, there was a need for new labourers for the plantations. In this period about 33,000 Javanese contract workers came to Suriname. Currently the Javanese community has grown to about 70,000 people. About 25,000 also live in the Netherlands, who left Suriname after it became independent in 1975. The language spoken by this group is known as Surinamese Javanese.

How does Surinamese Javanese differ from the language that is still spoken on Java? And how much is it actually spoken in Suriname? Linguistics student and FoS blogger Sophie Villerius (Radboud University) searched for an answer to these questions in her PhD thesis. For this purpose, she spoke to dozens of people in Suriname and in Indonesia.

The PhD student spent a lot of time in Commewijne, a district in Suriname where many Javanese live. It is a district with a number of former plantations, where large groups of Javanese found employment between 1890 and 1939. One of these plantations is Rust en Werk, where the Javanese currently make a living from shrimp fishing, among other things. These shrimps are, for example, processed into trassi, the well-known Indian shrimp paste. Another place that Villerius visited is Lelydorp, one of the desas in Suriname. A desa is a Javanese village. Javanese people in Suriname were also housed in Javanese village structures. This was to do with the Surinamese policy of keeping ethnic groups together as much as possible so that they could preserve their own culture.

Surinamese Javanese live in the countryside and are still reasonably grouped together, which contributes to the preservation of their language. Surinamese Javanese who live in the city speak much more a mixture of languages, says Villerius. Urban youth in particular now speak almost no Javanese. But it is spoken among the young people who live in Lelydorp or Commewijne. “But this is mainly with their grandparents”, according to Villerius. Nevertheless, she believes that the language will continue to exist for the time being, simply due to its cultural value. “Its daily use is declining, but there are some groups of young people who think it’s cool to use certain Javanese words or abbreviations.”

Influence of Dutch and Sranantongo

The reason why Surinamese Javanese is used less by young people is due to the fact that many families speak Dutch at home. Dutch is the language of education and schools encourage the speaking of Dutch at home. In this way parents increase the opportunities of their children on the job market. So now Dutch is often spoken at home, according to Villerius: “The parents of the youngest generation heard their parents speaking Dutch, and also chose to speak Dutch themselves, sometimes mixed with some Javanese. They want their children to be able to speak some Javanese, but Dutch is still more important.”

Because people switch a lot between Javanese, Dutch and also Sranantongo, Surinamese Javanese has also been influenced by these languages. The result of this is that the language has developed differently to the Javanese in Indonesia. In her thesis Villerius looked specifically at a number of grammatical structures and concluded that these differ in Suriname and Indonesia. Sranantongo in particular has had a structural effect on grammar: “This is due to the fact that the Javanese had to learn Sranantongo almost immediately after their arrival at the plantations so that they could communicate with the other population groups and overseers. This meant they became bilingual quickly.”

It was only later that the Javanese also came into contact with Dutch. Villerius: “At the start this was an unattainable language, of a group of people with a higher social status. It was only when education became accessible for Javanese people and they started to hold higher positions in society that they started to speak Dutch as well. This is something from the last decades. That’s why you see more recent influences of Dutch on Surinamese Javanese.”

In addition to grammatical differences, there are also differences at word level, explains the researcher. “An example of this is gwenti. This means ‘to be accustomed to’ in Sranantongo. The Javanese equivalent is no longer used in Suriname. For speakers, gwenti feels like part of their Javanese. And there are also words in Suriname Javanese that have become outdated in Indonesian Javanese. On Java they would say: that sounds like something my grandma would say.”

Therefore, as a result of these influences, Surinamese Javanese has developed differently to Indonesian Javanese, that in turn was influenced by Standard Indonesian. Speakers of the two languages can however understand one another. It is just that the Indonesians often find the language of the Surinamese impolite. “This is because in the past on Java you had different kinds of Javanese that differed in formality. To the people of the court and to older people you spoke the highest level and to children the lowest level. The different levels had a very distinct vocabulary. In Suriname this highest level was lost immediately, as there was little class distinction. Most Javanese were agricultural labourers. At first there was still an age difference, but now people speak informal Javanese even to older people. This is because the few young people that still speak Javanese generally only speak the informal type.”

Another difference is also related to its use. As Surinamese Javanese young people use their language less, they speak it much less fluently than their parents. “In Indonesia it’s exactly the opposite: there the young people speak it more quickly and more fluently. In this sense Javanese truly is a heritage language or migrant language in Suriname. The speakers switch more quickly to the language spoken by the majority of the population: Sranantongo or Dutch.”