Black Friday: the consequences of our consumerism 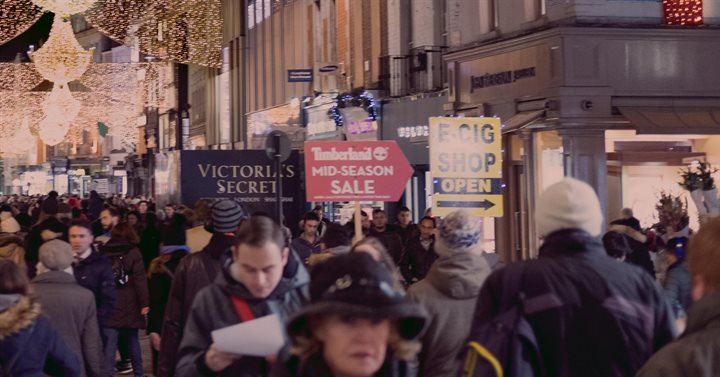 25 November is the date of this year’s Black Friday, aka high mass of the consumption society. Physical and online shops advertise their best deals of the year, and this is reflected in our buying behaviour: on no other day do we make so many purchases. But in these days of climate change, is it still justifiable for companies to push for unnecessary purchases, and what are the consequences for the environment?

Black Friday traditionally takes place on the day after Thanksgiving, and has for decades been one of the most important days on the calendar of US companies. “Retailers offer sensational deals, with discounts of up to 75%,” explains José Bloemer, Professor of Business Administration at Radboud University. “The name is often explained as a reference to the day when companies can finally record figures in black: all year, they try not to end up too deep in the red, but starting on Black Friday and during the run-up to Christmas, the increase in sales guarantees that they make a profit.”

Whereas ten years ago Black Friday was still primarily seen as an American phenomenon, it has now become really popular in the Netherlands. Research shows that 97% of Dutch people are familiar with the concept, and that 60% are interested in it to some extent. According to Bloemer, this is not surprising. “The Dutch like bargains. Remember the ‘Dolle Dwaze Dagen’ sale they used to have at the Bijenkorf? If it said ‘sale’ above a bin full of socks, everyone immediately started grabbing greedily. The Dutch are also massively into savings stamps, far more so than people in other countries.”

“Of course, there are also consumers who make conscious choices in this respect, for example because they have a more limited budget, and postpone buying things until Black Friday to take advantage of the discounts. But for many people, these are impulse purchases: if we see other people do it, we want to do it too. It’s just like COVID-19: contagious buying behaviour. Plus, Black Friday focuses more on buying gifts for yourself. Consumers are seduced into impulse purchases by marketing campaigns that promise greater happiness. But research shows that on the contrary, buying gifts for yourself ultimately makes you less happy than buying gifts for others.”

Companies do their best to cater to all our needs with their Black Friday campaigns. Incredible deals are on offer: discounts of 40%, 50%, or 80%, from €1999 for €1299: these are opportunities you don’t want to miss. Bloemer: “The message underlying this kind of discount is a bit of positive reinforcement; you get a reward, which makes you happy to grab a deal.”

“As a consumer, it’s far too easy to buy into this,” warns Bloemer. By taking a moment to think about what the company in question is trying to sell you, you may be able to resist the temptation. “Think about what you’re buying: do you really need that new coat now, or should you wait a bit longer?” According to Bloemer, companies should also take responsibility in this process. If they claim to take their social responsibility seriously, they should also be serious about publicising this fact. “It’s understandable that consumers want perks, but companies should make sure these perks are responsibly produced and processed after use.”

Ad Ragas, environmental scientist at Radboud University, couldn’t agree more. “Just the other day, I heard on the radio that a clothing company was planning to do something about sustainability. I was really shocked by what I heard. They said: ‘We’re going to improve the sustainability of our products. Because if you buy an item of clothing from us now, it’s budgeted to be worn 5 to 10 times. And we plan to raise this to 20 to 25 times.’ I almost fell off my chair,” says Ragas.

“Apparently, for years, this company’s policy had been that their product quality should meet the criterion that items could be worn 5 to 10 times! Looking at the bigger picture, I understand that this is simply part of the system of economic production: consumers have to purchase as many products as possible. No clothing producer hopes that you’ll still be wearing their product 25 years from now. And this, I think, is a fundamental problem. Luckily, companies are becoming increasingly aware of this. And I may be critical of this chain, but they’re taking steps towards improvement.”

The production of clothing, but also of many other products, usually involves large amounts of plastic. “Plastic production has increased astronomically, in particular in the last 30 years, because of a number of important advantages. Plastic is cheap, light, and flexible; it’s a good electrical insulator and it forms a protective layer. They don’t call it ‘plastic fantastic’ for nothing. And this is why it’s so widely used. But if plastic is used in a production process in such a way that it quickly ends up in the environment, you may wonder whether it wouldn’t be better to use an alternative material. This requires re-examining your entire production system.”

It’s clear by now that all this plastic is affecting the environment. We have all seen the images of miserable turtles and birds entangled in plastic, but the real effect is more dramatic, says Ragas. “In addition to these very visible effects on animals, there are less visible effects, such as the economic damage caused by large plastics in the environment. Think of boats that become entangled in plastic, or water filtering installations that get clogged.”

Ragas: “And then you have the microplastics. People have all kinds of suspicions regarding the effects of microplastics on organisms. You can divide these effects into three categories. First of all, you have physical effects, for example when plastic particles end up in your intestines and lead to infection or blockages. Then you have people who say: these plastics contain toxic substances, which are then released into your body.”

“The third effect – and this is the biggest question mark at the moment – is that if these plastic particles are small enough, they may end up in the bloodstream. This kind of invites the analogy with fine particulates, which end up in the bloodstream and cause all sorts of problems. There’s currently a lot of research on the effect these plastic particles have once they enter the bloodstream. As yet, there’s no evidence of it being very harmful, but that doesn’t mean it isn’t.”

“Getting plastic out of nature is incredibly difficult,” warns Ragas. “Of course, we should try to remove it as much as possible, but this isn’t a solution to the problem. For example, if a big piece of plastic sinks down to the bottom of the ocean, where it’s very cold and there’s no sunlight, or any bacteria to speak off, that piece of plastic can remain intact for hundreds of years. A piece of plastic in a river with waves and sunlight will break down faster and be gone after 50 years. Under optimal conditions, a used Coca-Cola bottle can disintegrate within 50 years, but in other conditions, it can remain intact for over 500 years.”

Bloemer and Ragas both think that it is time to up the pressure and seek solutions more actively. For example, Ragas is currently involved in a project that aims to define guidelines for safe and sustainable production. “I wouldn’t be surprised if in a few years we have regulations for this, for how sustainable a product should be, and how to test it. We have to put an end to avoidable use of plastic. Over the years that I’ve conducted research, my position on this has hardened. At first, I thought: this is something people have to arrive at of their own will. I’m a great champion of freedom, but not if individual freedom of choice leads to the destruction of our environment. Some things simply have to be forbidden or made extremely expensive. People will complain about it – I hate it too when I’m in the supermarket and discover that I’ve forgotten to bring a bag – but we simply have to put an end to single-use plastic.”

Bloemer: “In the course on Consumer Behaviour that I teach, I invited my students to reflect on socially responsible behaviour, and how we can promote it. What I noticed is that this is something that many students are concerned about: Should we buy everything new or is, for example, second-hand clothing not a better option? I see that companies are slowly also following suit, and in this way, consumers and companies can work together to bring about this change.”

You have a part to play

Do you want to be kept updated of our articles? Register at Radboud Recharge.