The image of a black hole

The defining feature of a black hole (BH) is the event horizon, the boundary from within which a particle cannot escape.

At the boundary of the event horizon, the gravitational pull becomes so large that nothing can escape, including light (that is why BHs are black!). For these reasons, the event horizon has been defined as “the shell of points of no return”. Interestingly, BHs are completely ”black” only within the event horizon, from but outside the event horizon, light can escape. Black holes tend to suck up surrounding matter in a process called ‘accretion’. This surrounding matter accreting onto the hole heats up through viscous dissipation and converts gravitational energy into radiation, radiating bright light at many frequencies, including radio waves that can be picked up by radio telescopes. This shining material accreting onto the black hole crosses the event horizon, resulting in a dark area over a bright background: this is the so-called black hole “shadow”. The shadow is essentially an image of the event horizon, lensed by the strong gravitational field around the BH (which bends the path of light rays, acting as a lens and distorting the image) and superimposed over the background light. The concept of the black hole shadow was known since 70′ but the idea to image it in the black hole in the center of our Milky Way was first presented in a paper by Falcke et al. (2000).

Let’s have a look at a simulated image of an accreting black hole: 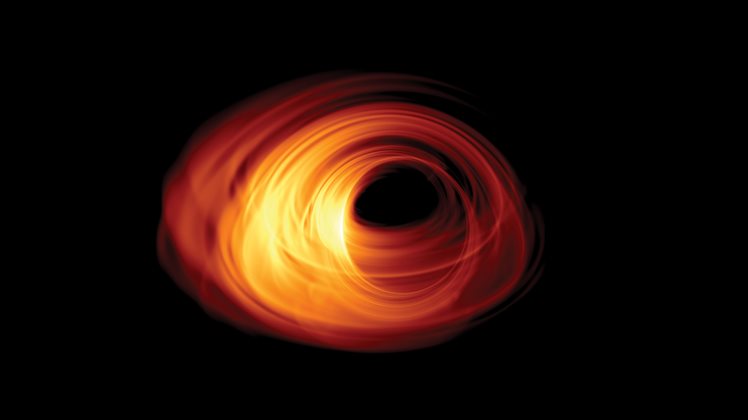 Simulated image of an accreting black hole. The event horizon is in the middle of the image; we can see the shadow (it looks like the top half of a circle, somewhat darker than its surroundings). The rotating accretion disk can be seen surrounding the shadow.
Image credit: Bronzwaer, Moscibrodzka, Davelaar and Falcke, Radboud University 2017. 4K black hole accretion flow image (inclination 60 deg, disk model) made using a HARM2D GRMHD slice in RAPTOR.

In general, the intrinsic size of the shadow is mainly determined by the BH mass: the bigger the mass the larger the shadow. The predicted size of the shadow cast by the event horizon of the supermassive black hole at the center of our own Milky Way is about 50 microarcseconds (that is one fifty millionth of an arcsecond, which is 1/3600th of a degree!). It is comparable to the size of an apple on the moon, as seen from Earth. 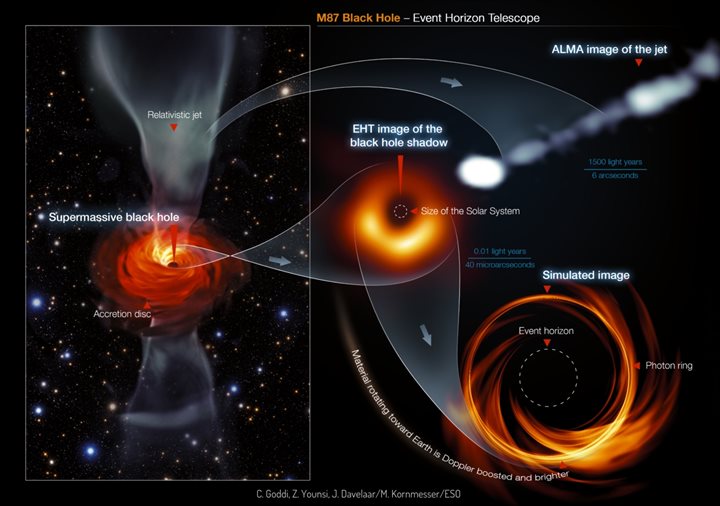 The supermassive black hole at the centre of M87. Left: The black hole feeds on a swirling disc of glowing plasma, driving a powerful relativistic jet across several thousands of light years. Bottom right: Approaching the black hole, gravity is so strong that light is severely bent, creating a bright (almost circular) ring. The north–south asymmetry in the emission ring is produced by relativistic beaming and Doppler boosting (matter in the bottom part of the image is moving toward the observer) and is mediated by the black hole spin (which is pointing away from Earth and rotating clockwise). Gravitational lensing magnifies the apparent size of the black hole’s event horizon into a larger dark shadow. The emission between the photon ring and the event horizon is due to emitting plasma either in the accretion ow and/or at the footprint of the jet (this emission is generally too dim to be detected by the EHT). Top right: While the EHT can zoom in very close to the event horizon, down to scales of only 0.01 light years (or 3.7 light days), i.e., a region comparable to the size of our Solar System, the relativistic jet (extended across several thousand light years) can be probed using ALMA intra-baselines, recorded during the EHT observations (greyscale image).
Image Credit: C. Goddi, Z. Younsi, J. Davelaar/M.Kornmesser/ESO   / C. Goddi et al. 2019, The Messenger, 177, 25  / Event Horizon Telescope Collaboration