The European Research Council (ERC) has awarded a Synergy Grant, named “BlackHolistic”, of 14 million Euro to a team of Dutch, British, Finnish, and Namibian astronomers to make colour movies of black holes. They will build the first ever African millimetre-wave radio telescope in Namibia to achieve their goal. The telescope will take part in the global Event Horizon Telescope network that became famous for making the first image of a black hole. The new grant will help to transform this network from making still images towards making movies and to understand black holes across the entire Universe. 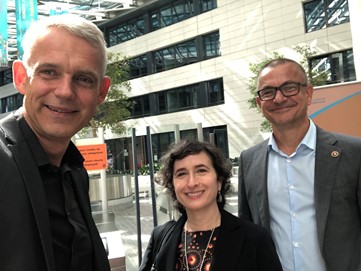 Over the course of six years, astronomers Heino Falcke (Radboud University), Sera Markoff (University of Amsterdam) and Rob Fender (Oxford University) will conduct research on black holes from different perspectives. Black holes are icons of the fundamental nature of gravity, the mysterious force shaping the Universe. They are also the Universe’s most efficient power houses, turning infalling gas into energy and outflows that, together with gravity, help mould galaxies and ultimately stars and planets. The Principal Investigators (PIs) bring together complementary expertise over the entire black hole mass scale in combining radio imaging with monitoring across the entire electromagnetic spectrum, astroparticle physics, and theoretical modelling to bear on the problem.

“Via the “BlackHolistic” Synergy Grant, we will try to understand what goes on just outside the event horizon of black holes. We need a better grasp of how the complicated physics of plasmas leads to the radiation and high-energy particles we observe, before we can do things like further test theories of gravity. At the same time understanding all of that will help us develop a complete picture of how black holes affect their environments on the largest scales,” says Sera Markoff.

The challenge in understanding the astrophysics of black holes and their impact on the cosmos is that they span >8 orders of magnitude in mass, size, and timescales, and emit light over 15 orders of magnitude in frequency. The new approach overcomes this scale separation by simultaneously addressing the dynamics of large and small black holes, in colour, i.e. across the entire electromagnetic spectrum.

Rob Fender: “With this funding we will take existing and future EHT observations and compare them with multi-frequency observations of black holes across the electromagnetic and mass spectrum. These data sets will allow us, for the first time, to understand the entire process of black hole accretion and jet formation from launch to termination. We will truly bring about a new paradigm for black hole research.”

The Synergy Grant centres around the construction of the Africa Millimetre Telescope (AMT) in Namibia. The first millimetre-wave telescope in Africa will be located at or near the Gamsberg Mountain in the Khomas Highlands. This will give it a unique vantage point with which the telescope will join the Event Horizon Telescope (EHT) network. The EHT collaboration published the first images of two supermassive black holes in 2019 and 2022, respectively.

“We played a leading role in making the first image of a black hole and captured the imagination of scientists and the public alike. Since then, the Event Horizon Telescope has made a major expansion effort, but Africa has been missing in this global network.  Now we can fill this glaring gap and bring these black hole pictures to life, in full colour,” says Heino Falcke. 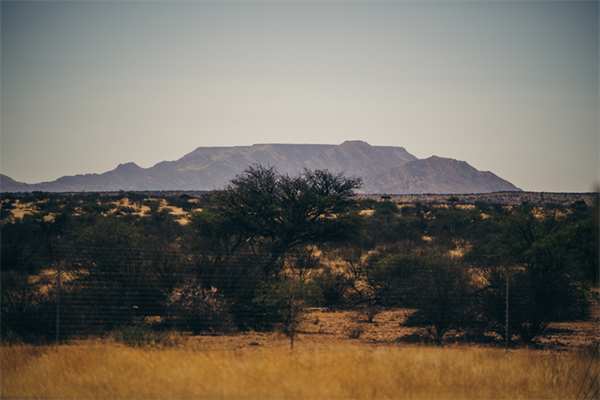 Located in the southern hemisphere, the AMT will have a particularly good view of the black hole in the centre of our Milky Way and will be a crucial link between telescopes in Europe, South and Latin America, as well as the South Pole. The team will also look for flashes of mm-wave emission from cosmic explosions, providing a new window to transient phenomena in the Universe. Construction and operation of the telescopes is also supported by a 12 million Euro guarantee from Radboud University over 10 years.

The lead investigators will work together with partners in Namibia and Finland. Researchers at the University of Namibia (UNAM) will support the construction and operation of, and science with, the AMT. They will also support the implementation of a social impact plan which focuses on skills and knowledge development in science and engineering in Namibia. The project will support several Master level and doctoral students via fellowships. “With the AMT, we will continue our investigation of supermassive black holes and their multi-wavelength emission properties. It will complement and build-upon the world-leading astrophysics research that has been conducted from Namibia with the H.E.S.S. telescopes during the past 20 years,” comments Michael Backes, head of the Namibian H.E.S.S. group and of astrophysics research at UNAM.

With the AMT, researchers at the University of Turku, Finland, will collaborate with the leading team to obtain high cadence observations of supermassive black holes, particularly during flaring phases that produce gamma rays and possibly neutrinos, allowing a unique new multi-messenger approach. “We are excited by the chance to collaborate, and to provide our expertise on long-term, high-cadence monitoring of supermassive black holes, and connections to gamma rays via the upcoming Cherenkov Telescope Array (CTA) project,” says Elina Lindfors from University of Turku, who has served also as Science Coordinator for CTA.