The international team of researchers that previously captured the first image of a black hole has now discovered a corkscrew-shaped jet of plasma near a supermassive black hole in a galaxy in the Virgo constellation. The researchers, including several Dutch astronomers, will publish their findings on 7 April in the Astronomy & Astrophysics journal. 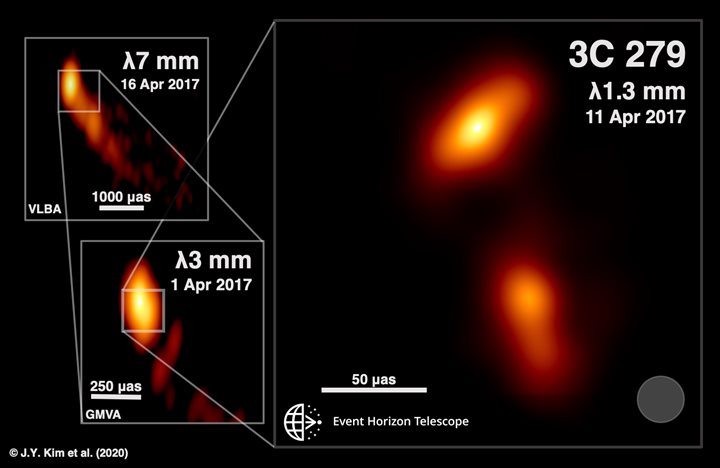 Image: Zoom in on the 3C 279 jet. “It's like opening a series of Russian nesting dolls and finding that the last doll is suddenly very different than the rest.” (c) J.Y. Kim (MPIfR) & Event Horizon Telescope Collaboration

To aid their research, the astronomers used data from the global observations of April 2017. That data had previously been used to capture the first image of the black hole in the M87 galaxy. Now it was used for the jet of 3C 279. Like M87, it is a galaxy in the Virgo constellation.

It has been known for some time that supermassive black holes sometimes create so-called plasma jets. Only, thus far, it was thought that a jet stream was straight. However, thanks to the new measurements, which are more detailed than ever, it seems that the jet stream actually resembles a corkscrew. The jet also turned out to be more dynamic than expected.

Principal researcher Jae-Young Kim of the Max Planck Institute for Radio Astronomy in Bonn is both delighted and surprised: “It's like opening a series of Russian nesting dolls and finding that the last and smallest doll is suddenly very different than the rest.”

In the coming period, the researchers will continue analysing the data from the previous measurement campaigns. Unfortunately, this will now require more time than originally expected, due to the fact that the March/April 2020 observation campaign has been cancelled because of the impact of COVID-19.