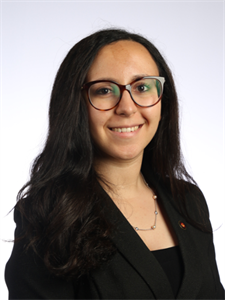 The prize consists of a sum of €3,500 and a nomination for the international Rising Talents programme of For Women in Science. This programme is aimed to improve the position of women in science and support young women in the continuation of their academic career. Issaoun is awarded the prize for her research on supermassive black holes as part of the Event Horizon Telescope (EHT) collaboration.

Supermassive black holes generate the highest energy processes in the universe and eject plasma jets that massively influence the Milky Way surroundings, but yet they remain a mystery. In her research, Sara Issaoun uses worldwide networks of radio telescopes to study the direct surroundings of the two largest supermassive black holes on the sky, in the centres of our Milky Way and M87. Issaoun’s research played an important role in creating the first image of a black hole using the Event Horizon Telescope.

The ‘For Women in Science Rising Talent Prize’ isn’t the first prize that Issaoun has received for her research. In 2019, she was awarded the Christine Mohrmann grant for her contribution to the research on the first image of a black hole. For this research, she also received the Breakthrough Prize with the Event Horizon collaboration.

Earlier this year, Issaoun was selected for the prestigious NASA Hubble Fellowship Program (NHFP), making her one of 24 researchers worldwide to do so. NASA’s research programme allows Issaoun to conduct research at the Smithsonian Astrophysical Observatory in the United States for the next three years.