Stratos II+, a rocket built entirely by students of Delft University of Technology, was launched October 15th, 2015 from INTA launch site in Spain. Stratos II+ rocket held a ~50cm long antenna to intercept radio signals below 30 megahertz and a digital receiver developed by a team of researches from Radboud Radio Lab. This experiment was considered as a precursors to a radio telescope on the moon. Such a telescope would, for the first time, enable researchers to measure radiation generated shortly after the Big Bang. This radiation cannot be measured by radio telescopes on Earth because we produce a lot of it ourselves at the same frequencies, and because our atmosphere absorbs it. 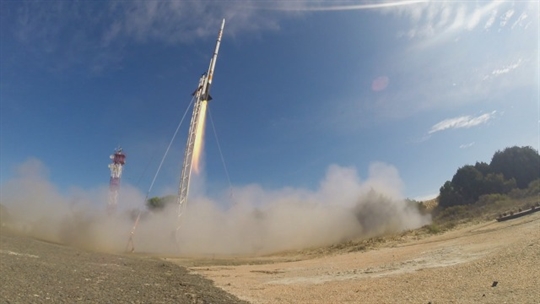 Demonstrating the technology and testing in a space-like environment

Building a radio telescope on the moon involves special requirements regarding the weight, dimensions, power consumption, as well as the processing and transfer of data. Launching radio antenna and digital receiver with Stratos II+ rocket provided RRL team with a unique opportunity to design, build, and test the digital receiver in a space-like environment.

The primary goal of the experiment was to demonstrate the functionality of the technology and use the antenna to measure the radio frequency interference (RFI) in the atmosphere, and how the strength of the signal which we produce increases as the rocket climbs to the apogee. The rocket was therefore loaded with equipment for power supply and with equipment to record and analyse the data produced by the antenna.

On Friday, October 15th, RRL radio payload was launched with the Stratos II+ rocket, the rocket remained approximately 11 minutes in the air and reached a height of ~21 kilometers. The bad news was announced on Friday evening Oct.15th, 2015 when RRL team realized data was lost after lift-off due to the effects of rocket high acceleration on payload power lines, however the payload was still functioning properly after recovery and could survive launch.