Socio-economist Dr Jeroen Smits, from Nijmegen School of Management is fascinated by big data. Sitting at his computer, he maps the entire world, especially the developing countries.

There are 30 million people in Jeroen Smits’s computer. They live in Colombia, for example, Pakistan or Tanzania. Ask him what the average level of education is of an adult female in the Harare region of Ethiopia, and he will answer with just the click of a button. Smits is a big-data expert. By making new connections between existing data, he hopes to contribute to solving world problems.

An example: most twins are born in Central Africa. God only knows why, but Smits and an English colleague discovered this fact by analysing data. Benin holds the top score with 27.9 twins born for every 1000 deliveries (in comparison: in Asia and Central America, the score is less than 8). Smits published an article about this in PlosOne in 2011, and the study became a hit. No one had previously considered the idea of comparing the number of twins born in various countries.

Last year, a new article was published in The Lancet Global Health: the rate of child mortality was highest among the twins in Central Africa. Together with a colleague, Smits reached this conclusion by superimposing the ‘twins map’ on top of the ‘infant mortality map’. “Although all sorts of interventions are reducing infant mortality in Africa, this is happening much more slowly among twins,” he says in his office in the Elinor Ostrom Building. “Fifteen percent of the newborn babies who die are from twins.” Conclusion: more attention should be paid to the vulnerable health of twins and their mothers. Only then can we further reduce infant mortality.

Is he saving lives by comparing figures from behind his computer in Nijmegen? He won’t say so himself – Smits is a modest man – but indirectly it could be true. “I can see that the article has been well read. My role as a scientist is to ask the right questions and make the right connections. You then hope that others will read the conclusions and take action.” In the end, government or health organisations are the ones who should work in Africa to better supervise pregnant women.

In 2004 Jeroen Smits received a Vidi grant (research grant from the Netherlands Organisation for Scientific Research). He was delighted because, with that money, he was able to build his own data centre, which since 2013 has been known as the Global Data Lab. Its website www.globaldatalab.org contains large numbers of indicators for developing countries. Other researchers can also use the information, which is available for free. There is data about health, educational participation, family sizes, marital ages and life expectancies per province. Smits doesn’t collect the data himself; the information comes from organisations like UNICEF and the American USAID, that study demographic developments.

“The studies are usually random samples in a country,” Smits says. “For example, you get information from 80,000 respondents in Tanzania with 1000 variables.” The organisation in question writes a report from a certain perspective, and the raw data ends up in an archive.

Precisely those ‘scraps’ are gold for Jeroen Smits. Like a beachcomber, he searches through the websites where the data can be found. “Look, here are the ongoing surveys. These data will soon be available: Afghanistan 2018, Albania 2017. I usually consult the standard Demographic and Health Surveys. I’m still waiting for New Guinea, a country that we don’t yet have good data on. Oh, here, Cambodia 2014 has just become available; I’ll download it.”

He downloads the databases, stores them and then runs a harmonisation base so he can standardise the frequently occurring variables to make comparisons. And then you can do all sorts of analyses on them. In recent years, he and his PhD students have studied the number of women in the job market in Muslim countries, ethnic conflicts, mixed marriages and retarded growth among children in Africa. “I still have so many research questions. The problem is that it takes so much time to carry out a good analysis.” 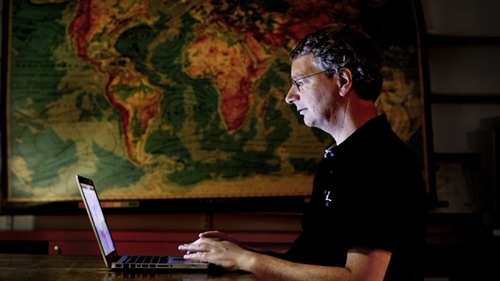 Smits showed us what sorts of things you can do with data. If you want to know how strong the position of women in a certain country is, marital age is an indicator. “A large age difference with the husband automatically means that, as a woman, you have a subordinate position. In some regions, girls marry at the age of 15 or 16. Then they usually don’t go to school, which makes their position even weaker. You can map many more consequences. UNICEF thinks that girls shouldn’t marry before the age of 18 and they are conducting a campaign about this.”

Social scientists are often thought to be allergic to figures, but that doesn’t apply to Jeroen Smits. He studied Psychology and Sociology, received his PhD in Sociology, was a researcher at various universities and ended up in the databases in Nijmegen. “I’m with the economists here, a fine place to work.”

He overhears bits of conversations at birthday parties or hears someone say something on TV. “I could look that up,” he thinks, if it’s about assertions that are dubious. “But people often don’t want to hear about it. For example, you can see that the crime figures in the Netherlands have been drastically decreasing for years. There are people who don’t want to believe that because they want to link criminality to the increasing number of migrants.”

Smits isn’t an activist nor does he write impassioned editorials in newspapers. He prefers to work in the background. His latest contribution to society is a new socio-economic division of the world at the provincial level. He explained: each year the UN ranks countries on the basis of human development. Which countries are on the rise and which ones are lagging behind? This is called the Human Development Index. But a national average is often misleading. In poor countries, the cities are better off than in rural areas. The further from the capital, the worse the facilities. That’s why it’s also important to map the situation in a country’s regions.”

Smits did just that together with a colleague researcher. They spent more than a year colouring in the world map on the basis of their own database. In May, he presented the Sub-National Human Development Index, an instrument that the UN immediately embraced. “Compare it to a telescope that you use to look at the Earth. First you saw 160 pieces, now 1600. You can zoom in more easily and more precisely determine which areas are lagging behind.” Smits is currently working on a publication about this project.

What he would then like to do is to superimpose the socio-economic map of the world on top of the ‘natural’ map of the world. “The EU Copernicus project is studying the Earth via all sorts of satellite systems in outer space. All of the data are freely accessible. You know how temperature is developing, what the chance of precipitation is, and, for example, you can study the extent to which climate change is increasing the chance of ethnic conflicts. I also want to study how the impact of natural disasters – like the earthquake on Lombok or the cyclone on St. Maarten – depends on the situation of the people who live there. Does a population that is more highly educated or healthier know how to deal better with such a disaster and recover more quickly? It’s a technical challenge to make a connection with our data because satellites divide the Earth into grids and blocks, whereas I have data about areas. I’m now working with the German Max Planck Institute for Biogeochemistry. We hope that together we can better study the human-environment interaction. I think this is an important step that has to be made.”

This article previously appeared (in Dutch) on Voxweb and the RU website.