The first one thousand days: foundation for a language-ready future 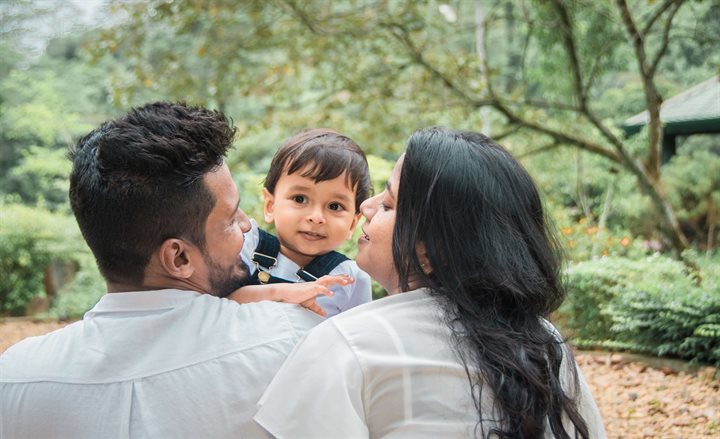 As soon as a child’s ears work, it’s able to hear language. That's even before birth, in the last trimester of pregnancy, says Paula Fikkert, professor of First Language Acquisition at Radboud University. 'Those first one thousand days - a number you shouldn't take too literally - begin even then. That's when a fetus is already listening to the rhythm of language.'

Once a baby is born, they can hear the difference between their mother tongue and another language with a different rhythm. After about six months, they can distinguish sound contrasts that are important in their mother tongue. Fikkert: "That starts with the vowels. An important task for Dutch babies because Dutch is a vowel-rich language. A few months later, they listen to consonants. Chinese children lose the ability to distinguish the L and the R around that time, because it is not relevant in their language.' By the end of their first year of life, children have a clear preference for their native language.

In that early phase, when babies are not yet talking themselves, your role as a parent is very important: 'What we know is that the brain develops better in children who hear a lot of talking. You see more brain activity. And what we also know: the more language you hear in that young phase, the larger the vocabulary is later in life. And between vocabulary size and study success, again, there is a strong correlation.

In short: it makes sense to talk a lot with or to your young child. 'Babies don't say anything back yet, and sometimes that makes it seem like there’s no point in talking to them – but that’s not the case. Language is so natural to us. But for a small child, all that talking is mostly a mush of sounds. It takes a while to discover structure and regularity in that. And what they also learn at that early stage is that language is a means of communication at all. When children start babbling and you respond, they learn from that: that is the beginning of a conversation!

When is it going well, when could it be better?

So if things go well, children can learn a tremendous amount in language in the first one thousand days of life. But when are things going well and how can they be improved? When can you hold back and when should you intervene? That is what Paula Fikkert and her colleague Caroline Rowland of the Baby and Child Research Center at Radboud University aim to study. To do this, they’ll need both funding and children.

'There are quite a few children whose language acquisition does not develop well on its own. Sometimes this has a clear cause: for example, because they are deaf or hard of hearing. Sometimes the cause is much less clear, but children appear to have a language development disorder, which often goes unrecognized during the first few years. In our Baby and Child Research Center (BRC) we see many children of highly educated parents, who are familiar with the university and know how to get in touch with us. We learn a lot from these children, but all in all it is not a cross-section of the population. We would very much like to study more children who, as far as we can tell, are just developing. Because only when you know what is "normal" can you say something about when language development lags behind. And: under what circumstances should you intervene and when does it work itself out over time? For example, if a child has not had sufficient language provision, you can usually catch up. If there is a language problem, we can give children (and parents) extra support in learning a language.'

How to help your young child with language

Want to make your young child as language proficient as possible? Five expert tips on what to do next - and one on what you may want to avoid.

Tip 1: Talk to your child and name everyday things.

Tip 2: Sing with your child. "There is structure in songs, children like that and in doing so they also learn to recognize structure in language.”

Tip 3: Look at what your child is looking at and talk about it, instead of drawing attention to something else with a "look what I have here". Fikkert: 'There have been very nice experiments with parents and children who both have a camera on their head that follows what they are looking at. It turns out that children learn words better if they look at what is being named.

Tip 4: Read to your child. 'The language in booklets is often just a little more complex and rich than everyday language. Moreover, reading aloud also teaches children to keep their attention somewhere.'

Tip 5: 'Tell stories, without a children’s book or pictures. That stimulates their imagination.'

And don't let your young child play with an iPad or other tablet for too long. 'They do like it, but language is not learned from machines, but by talking to people.' Besides, online games offer so many options that children aren’t able to discover much on their own. The whole point is to stimulate the desire to learn.'

Nowadays children are tested at the child health center with a short test to monitor their language development. This is a good start, but doesn’t always provide enough information, says Fikkert: “Sometimes language production starts late, but this says nothing about their language development. Or a child may say a few words, but their development then stagnates. It is also important to know the state of their language comprehension and perception. These are also important indicators to be able to assess the delay.’ With their research at the BCR, Fikkert and Rowland want to make it easier to measure precisely that.

‘This project is not specifically aimed at parents who have concerns. We want more visibility into what variation there is so we can better identify when a problem arises. We would like every child to go to school with sufficient baggage. Because if you can’t keep up on language, in the long run you can’t keep up in all sorts of areas. It is estimated that 25% of the Dutch population leaves school with too low a language level. That is a handicap for the people concerned, but it is also a great loss for society.’

The project "The first one thousand days", with which Fikkert and Rowland aim to gain more insight into "normal" language development, is a project to which you can donate money through the Radboud Fund.

If you are already curious about our research and would like to participate with your (grand)child in research at the Baby and Child Research Center, please register through babyandchild.nl