Date of news: 18 April 2018
Vitória Piai, assistant professor at the Donders Institute for Brain, Cognition and Behaviour of Radboud University and the department of medical psychology of Radboudumc has received the NVN Early Career Award. This award is given every two years to a scientist who has made a substantial contribution to the field of neuropsychology and who is early career (i.e. within 6 years after receiving the PhD degree).
Piai received this award for her research on language function in healthy and neurological populations. In her research, she applies a range of behavioural and neuroimaging methods and pays special attention to the intersection of language and other functions, combining a model-driven approach with clinical application. 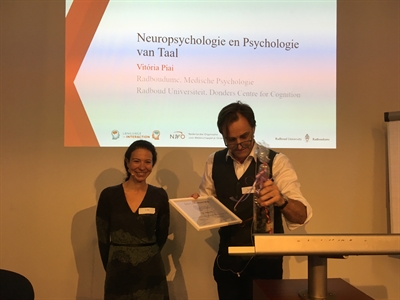 Vitória Piai has received the NVN Early Career Award
Dr. Piai graduated from Utrecht University (BSc) and Radboud University (MSc), completed her PhD with the highest distinction at the Donders Institute in Nijmegen and held postdoctoral fellowships at the University of California in Berkeley and in San Francisco.  She has obtained several prestigious grants (including the NWO Rubicon, VENI, Gravitation programme Language in Interaction PhD grant) and her research has been published in top journals in the field, includingPNAS, Scientific Reports, Neuropsychologia, and Psychonomic Bulletin & Review.
She has received the award plus an amount of €1000 at the Spring Conference of the Netherlands Society for Neuropsychology (NVN) on April 13, in Utrecht.
For more information see www.nvneurpsy.nl
Delen