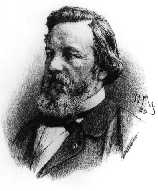 Franciscus Cornelis Donders was born on the 27th of May in 1818, in Tilburg, a manufacturing town in North Brabant, the Netherlands. He had eight older sisters - to have a son was a long deferred hope of his parents.   Frans Donders went to seminaries in Tilburg and Boxmeer and subsequently attended Medical School in Utrecht. The rest of his academic career (from the age of 29 on) he held a position as Professor of Physiology at the University of Utrecht. (To read F.C. Donders acceptance speech (in Dutch) after obtaining his professorship, click here (pdf, 280 kB)).

Donders was one of the pioneers of ophthalmology. His major contributions were in the areas of refraction and astigmatism. In 1858 Donders established the first eye hospital in the Netherlands. In 1864 his influential work "On the anomalies of accommodation and refraction of the eye with a preliminary essay on physiologic dioptrics"  was published in English. It describes a complete doctrine, both theory and practice, of the employment and prescription of corrective glasses.

Donders' interests included not only ocular physiology, eye movements (he discovered what came to be called the Law of Donders), color vision and color blindness, but also general physiology, evolution, and mental processes. His views are strikingly modern. For example, he investigated cerebral circulation, and was excited about his discoveries on the topic of oxygen metabolism in the brain:

"As in all organs, the blood undergoes a change as a consequence of the nourishment of the brain". One "discovers in comparing the incoming and outflowing blood that oxygen has been consumed" (Donders, 1868). This insight, together with a subtractive method designed by Donders, constitutes the basis of the two most widely used modern functional neuroimaging techniques, PET and fMRI.

Donders was also interested in the mechanisms underlying speech. In his monograph "De physiologie der spraakklanken, in het bijzonder van die der Nederlandsche taal" [The physiology of speech sounds, in particular those of the Dutch language] (Donders, 1870), he gave a detailed account of the acoustic and phonetic properties of (Dutch) speech sounds and how they are articulated.

Donders was the first person to measure the time it takes to name stimuli by spoken responses. One way he achieved this was by using the "noematachograph and phonautograph" as follows. Two participants A and B were seated before the mouth of the phonautograph. While the cylinder was rotated, A uttered a syllable and B had to repeat it as quickly as possible without making mistakes. The beginning of the oscillations caused by the two sounds was marked on paper (illustrated below) by points a and b on a line (P). The time interval between the two points was deduced from the oscillation (261 Hz) of a tuning-fork recorded simultaneously (S). The latency of the response was found by counting the number of oscillations recorded between a and b, irrespective of their length (i.e., a constant speech of rotation of the cyclinder is not required).

"The idea occurred to me to interpose into the process of physiological time some new components of mental action. If I investigated how much this would lengthen the physiological time, this would, I judged, reveal the time required for the interposed term" (Donders, 1868).

Donders attempted to describe the processes going on in the mind by analyzing cognitive activity into separate, discrete stages. Until Donders' work, many (if not most) scientists had assumed that the mental operations involved in responding to a stimulus occurred instantaneously. Donders was particularly interested in "timing the mind" and designed a subtraction technique to time the different mental processes that the brain goes through when faced with different tasks. This concept of subtraction forms the basis of much modern functional brain imaging work. Together with his student De Jaager, Donders performed experiments using reaction time tasks in the early 1860s. His was the first attempt to analyze and measure the component processes of a simple task. He used three experimental paradigms:

(Method a) A simple response time task. For example, you are seated in front of a panel that contains a light bulb and a response button. When the light comes on, you must press the button.

(Method b) A choice response time task. For example, you are seated in front of two light bulbs, each with its own button. You must press the button corresponding to the appropriate light.

(Method c) A go/no-go discrimination response time task. For example, you are seated in front of a panel with two light bulbs and one response button. When the target light goes on you must press the button, but not if the other light comes on.

Donders then predicted the kinds of processes that might be involved in each task:

Donders used a large variety of tasks. The stimuli could be colors, written syllables, or spoken syllables, and the responses could be manual key presses or spoken responses. In passing, he made a number of other seminal observations. "We made the subjects respond with the right hand to the stimulus on the right side, and with the left hand to the stimulus on the left side. When movement of the right hand was required with stimulation on the left side or the other way around, then the time lapse was longer and errors common" (Donders, 1868). This S-R compatibility phenomenon was rediscovered a century later, and came to be called the "Simon effect". Donders first reported his findings on a meeting of the Dutch Koninklijke Akademie van Wetenschappen (Royal Academy of Sciences), on June 14, 1865, in Amsterdam. The meeting was chaired by Donders himself - he was the president of the Academy for 17 years. A report of the meeting can be found in "Proces Verbaal van de gewone vergadering der Koninlijke Akademie van Wetenschappen. Afdeeling Natuurkunde op saturdag 24 Junij 1865".

Donders realized that the mind is not the brain, but what the brain does. As concerns mental phenomena, one should investigate "the relation between these phenomena and the action of the brain", trying "to locate the various mental faculties as much as possible" (Donders, 1868).

However, "a complete knowledge of the functioning of the brain, with which each mental process is connected, does not carry us a step further in the understanding of the nature of their relation" (Donders, 1868). Donders lacked the theoretical apparatus to precisely specify mental processes (the computational theory of mind and its modeling tools he would have needed took the full first half of the 20th century to develop), but he discovered another handle on mental processes, the response time: "But will all quantitative treatment of mental processes be out of the question then? By no means! An important factor seemed to be susceptible to measurement: I refer to the time required for simple mental processes" (Donders, 1868).

To measure the speed of mental processes, Donders designed a number of instruments (shown below), which were made in a special department of his laboratory by the mechanician Kagenaar, a pupil and friend of Donders. The working of the instruments is described in "Twee werktuigen tot bepaling van den tijd, voor psychische processen benoodigd" (Two instruments for determining the time required for mental processes), which appeared in Onderzoekingen gedaan in het Physiologisch Laboratorium Utrecht, 1867-1868, 2, 21-25. 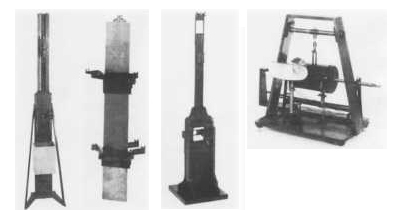 At the end of his seminal article on the measurement of mental processing times, Donders reports that "distraction during the appearance of the stimulus is always punished with prolongation of the process" (1868). This observation is interesting in the light of later research developments exploiting distraction, in particular, the work of J. Ridley Stroop in the 1930s.

In the recent era of neuroimaging Donders’ subtraction method was extended from the temporal to the spatial domain. In the last decades of the 20th century Posner and others realized that the logic of Donders’ subtraction method could be fruitfully applied to isolate the localization of functionally defined activations in the brain. This resulted in the birth of cognitive neuroimaging as we know it today.

In his times Donders was recognized as an eminent scholar, not only within but also outside of academic circles. Evidence of this can be found in one of the most popular books for the youth at the end of the 19th century and throughout the 20th century: “Het leven van Dik Trom”, written by Cornelis Kievit (1858-1931). In one of the chapters Kievit writes about the yearly outing of Dik Trom’s school class to Wijk aan Zee, a resort on the Dutch sea coast. Upon arrival, the teacher of Dik Trom’s school class finds out that Wijk aan Zee’s most famous holiday guest is Professor Donders:

In many ways F.C. Donders paved the way for modern cognitive neuroscience. Donders contributed to neurophysiology by his work on muscular activity, blood flow and movement in the brain. In addition, Donders became the founding father of mental chronometry by developing methods to measure the duration of mental processes in controlled experimental situations. As such he had a profound influence on the development of experimental psychology. The organizers of the Donders lecture series therefore thought it appropriate to honour Donders' contribution to cognitive neuroscience by naming the lecture series after him. 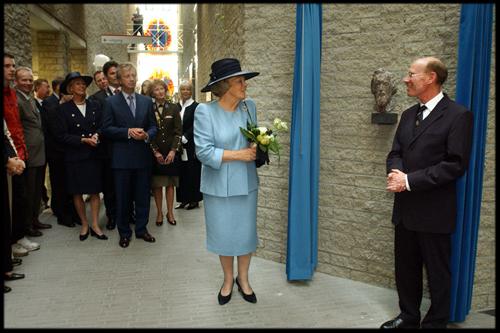 Opening of the Centre for Cognitive Neuroimaging (2002). In the presence of various officials and representatives of the University, Her Majesty Queen Beatrix unveils a bronze bust of Franciscus Cornelius Donders, the namesake of the Donders Institute.

Donders' seminal report in Dutch, German, and French respectively, has been translated into English and reprinted as "On the speed of mental processes" in the journal Acta Psychologica (1969) and in the volume Attention and Performance II (W. G. Koster, Ed.) in 1969.

Acceptance speech given on obtaining his professorship at the University of Utrecht (In Dutch).

We are grateful to Ardi Roelofs who provided his webpage on Donders as input for this webpage.