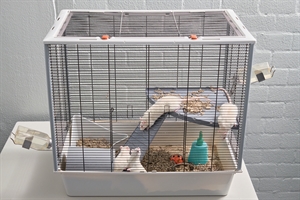 Within the TNU, in 2019 we used 2582 mice and 1023 rats. Of these 707 rats and 1921 mice had a cumulative severity of mild,  232 rats and 466 mice had a severity of moderate and  75 rats and 53 mice had a severity of severe.  Experiments with severe discomfort for the animals are rare at  TNU and only fall into that classification due to including multiple procedures that themselves do not not cause great discomfort (e.g. 2-3 surgeries for specific techniques with intervening recovery periods each procedure classified as moderate) or more stressful behavioural techniques such as foot shock (to investigate the impact of psychological trauma or stressful event on mental disease development).

Nine rats and 142 mice were part of only non-recovery experiments (no severity listed). As part of breeding procedures 1210 rats and 2724 mice were bred but not used in experiments. This is due to e.g. animals not expressing the desired gene or are the wrong gender. For example, when one wants to investigate a disease that is based on homozygote gene expression (both copies of the gene need to be affected) but breeding is based on both parents being heterozygote (having only one affected copy and one non-affected copy), there will be 25% offspring with no affected gene (these animals can be used as controls in experiments), 50 % offspring which are heterozygote (can be used for e.g. further breeding) and only 25% with the desired genotype with two affected gene copies. Therefore, not all animals that are born can be used in investigations into this specific type of disease, at the same time it is impossible to avoid having these animals when breeding for certain genotypes. However, it is important to know that animals that are bred but not used in experiments do not undergo any discomfort since they do not receive any treatments or other kinds of interventions.