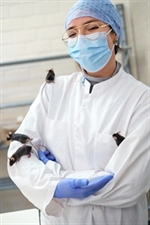 TNU is a unit within the Animal Research Facility (CDL) of Radboudumc and comprises an interdisciplinary team. We are over 80 researchers working with animal care technicians of the CDL and the veterinarian of the CDL. The unit is coordinated by two staff members and receives technical support by two more staff members.

Using alternatives is a good way to reduce the amount of animals needed, but currently no alternatives exist that can completely replace animals in research, instead they are complementary methods.

The well being of laboratory animals is an issue of crucial importance. Within our animal unit, we handle all animals with care and avoid stressful handling techniques as much as possible.

In order to investigate the functions of a protein or to mimic the symptoms of a disease, researchers often increase or decrease the levels of a certain protein or induce changes at the genetic material.

Example of techniques available at TNU

At the TNU we make use of a large maze, object recognition rooms, prep rooms and many more techniques. See here for some examples and a full list of all techniques available.

Types of animals used in TNU