All researchers at the TNU will use alternatives to animal research as much as possible. Our researchers use organoids (Kolk lab), simpler animal models such as flies (Storkebaum lab), computer models (Englitz lab, and others) and humans themselves (Genzel lab, Homberg lab).

Using alternatives is a good way to reduce the amount of animals needed, but currently no alternatives exist that can completely replace animals in research, instead they are complementary methods. Each alternative has its virtues and limitations (see Figure). One example is organoids. 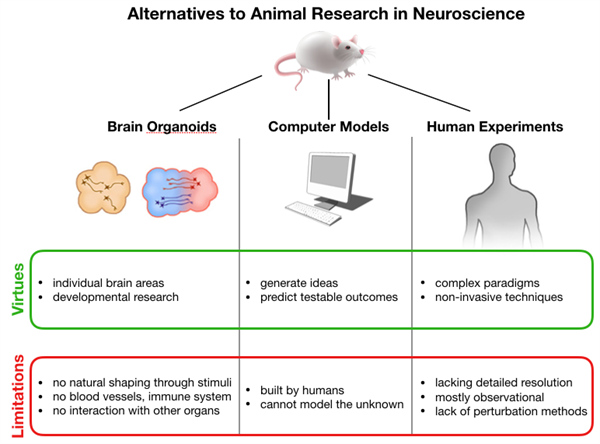 In order to advance the understanding of the maturing brain, we are making substantial progress in developing brain organoids, which are cultured miniature brain parts derived from human Induced Pluripotent Stem Cells (hIPSCs), that offer unprecedented new ways to study aspects of human brain development. These brain organoids can model human brain disease and help screen for drug effects at the molecular and cellular level.

This can also be achieved by organotypic slice cultures of respective brain areas, which are shorter-lived and obtained from postmortem tissue of various ages. Brain organoids can model individual brain areas or, in some cases, even more complex systems of two brain areas, called assembloids. However, a brain organoid is by no means a complete brain and presents several limitations:

As such, organoids are promising for specific goals such as developmental research but not yet applicable for several other research goals.

Indeed, a brain organoid is deprived of sensory input from the body and hence lacks the ability to interact with the outer world. This is crucial because the brain's connectivity and function is shaped in large parts in the context of sensory experience, which is absent from brain organoids.

Furthermore, understanding brain function is almost always tied to behaviour and cognition. Organoids or brain slices obviously cannot ‘behave’, nor can they solve a memory task. Also, life events affecting the brain, such as parenting and stress, or daily life processes like feeding, sleep and exercise, cannot be modelled in cell systems or organoids.

Therefore, organoids are extremely promising for specific goals at the cellular or molecular level in neuroscience research. However, the potential to use these model systems as an alternative to animal research is limited in neuroscience. In fact, organoids are a complementary approach that are most often combined with research on the whole animal.

An example is the microtransplantation of brain organoids into a living host (e.g., mouse model) allowing the investigation of the therapeutic potential of human cerebral organoids. One important limitation is that organoids grow in a closed system and need growing media containing crucial elements produced in animals, typically obtained from fetal calves. Moreover, in vitro findings need to be validated in vivo using animal models, and thus full replacement of animal research using in vitro models is currently not possible.

For all of these reasons, we argue that brain organoids complement animal research and can help to reduce animal use, but cannot be used to completely replace animal research, particularly not behavioural neuroscience research.