Types of animals used in TNU

Long Evans rats are outbred white rats with a black or brown hood and a dark stripe on their back. These rats are a general multipurpose model ideal for behavioural research, learning paradigms, addiction and metabolic studies. Lister Hooded rats are outbred rats with a docile disposition. This particular strain is susceptible to audiogenic seizures. We also use black-6 mice, which are outbred.

Some of the special strains

Targeted Recombination in Active Populations (TRAP) mice
This transgenic mouse line allows the researchers to fluorescently label populations of neurons that are activated over a certain period of time. It is currently thought that each experience (e.g. memory) is represented by those neurons that are activated during learning across different brain regions. By using the TRAP mice, researchers can investigate memory representations in the brain. 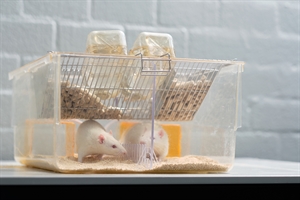 Dopamine D1 Receptor (DRD1)
This is a rat model, obtained through ENU-driven target selected mutagenesis, which has a genetic mutation in the dopamine receptor. In this model, there is a reduction in transmembrane dopamine D1 receptors, which has downstream effects on social behaviour (such as a strong reduction in social interaction, scent marking and socialbility). This rat model is particularly useful in studying psychiatric disorders such as schizophrenia, autism and drug addiction. 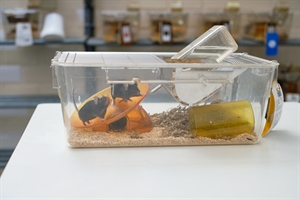 Euchromatin Histone Methyltransferase 1 (EHMT 1 + /- ) mice
These mice have a particular deletion of the EMHT 1 gene, which is at the heart of the Kleefstra syndrome, which encompasses moderate to severe intellectual disability, hyperactivity and autistic like features.  EHMT +/- mice also display such traits, ranging from diminished social play, to learning and memory deficits and hyperactive behaviour. Through the use of this model, researchers can elucidate the underlying mechanisms of EHMT deletion.