Imagine a bowl full of delicious cherries. You reach out, but suddenly withdraw your hand when you spot a mouldy one. This kind of approach-avoidance behaviour is known in academic circles to reflect both appetitive and aversive motivation.

Nevertheless, it has not been understood, or used, by the food industry. Why should they? Because testing of consumers ‘liking’ a new product is notoriously bad at predicting that product’s success in the market. This is a serious problem for any food company, but especially for those with the ambition to create delicious new products that are lower in unhealthy fat, sugar and salt, but nevertheless sell well. 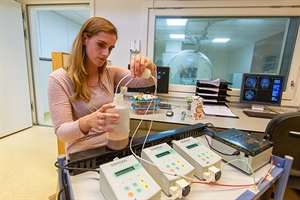 Kraft Heinz is such a company and it works on these challenges together with the contract research organisation NIZO. Joost Wegman, Roshan Cools, and Esther Aarts figured out that a 9-point scale, including questions such as “Would you buy this product?” only results in socially desirable answers. Instead, they developed an approach-avoidance task to measure subtle differences in motivation for different – but almost indistinguishable – Heinz tomato ketchups, using joystick movements towards or away from pictures associated with the taste of each ketchup.

Based on only 40 consumers, differentiation between new products was more precise than with consumer panel testing involving hundreds of consumers. Furthermore, they tested the approach-avoidance task in an MR scanner, where it activated the ventral striatum, a core region in the brain’s motivational network. The same participants then received an EEG – with Dennis Schutter – and the deep ventral striatal MRI signal was correlated to the cheaper and easier-to-use EEG signal. This joystick-EEG system, which is called telemetry, is described on NIZO’s website.

Kraft Heinz is currently investigating whether they can implement the “approach-avoid task” in consumers’ homes by developing a smart-phone version, while NIZO is testing the system with a different food company and relating it further to financial impact. The initial results are very promising and may lead to a revolution in consumer testing of new, healthier products.