Example of techniques available at TNU

In the HexMaze task rodents learn the location of a food reward in a large maze of hexagonally arranged gangways. We have shown that mice and rats can learn this spatial memory task. Once the animals have acquired knowledge of the general maze layout and visual cue distribution, i.e. a spatial, cognitive map or schema of the environment, one can introduce updates to the maze geometry or goal locations.

This task is used to test how rodents build-up and update the knowledge of their surroundings and animals are trained for six to twelve months in the task with 2-4 training sessions per week of each 20-60 minutes. In general, the rodents enjoy running these experiments. For example, the rats do not have to be food deprived to motivate them to run the maze for rewards.

Surgeries for observational and interventional techniques in neuroscience

Animal researcher use sterile, stereo-tactic microsurgery to enable live recording of neural activity from brain region(s) of interest or introduce interventional techniques into brain areas.  In vivo recording of brain activity is a powerful method to understand the neural basis of behaviour, cognition and disease. 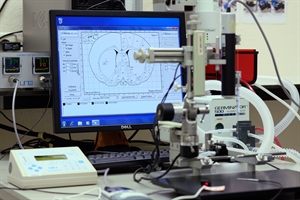 The surgery is carried in a sterile environment and the animal is anesthetized during the surgery while its body temperature and heart rate is constantly monitored. Briefly, the animal is placed on a stereotaxic apparatus (i.e., stereotaxic frame) at the beginning of the surgery. By using a set of previously-sterilized tools, a small incision is made on the skin of the scalp and periosteum. By using several reference points on the skull, the researchers can then target specific brain regions and either inject substances (such as genetically-modified viruses or chemicals) through a fine syringe or implant electrodes or mini-cameras on the head of the animal. Which strategy to apply, in other words if the researchers aim at manipulating or visualizing brain activity, depends on the research question. 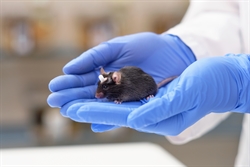 Every operated animal is closely monitored, especially in the first 5 days after the surgery to ensure their well-being and recovery. Critically, during as well as after the surgery aneasthesia and pain relief measures are used, akin to those used for human surgery. Therefore, we ensure that animals do not suffer unnecessarily due to these procedures.

For further details and a video on how stereotaxic surgeries are carried, visit Fornari et al. (2012), Journal of visualized experiments : JoVE, an article published by a research group currently working at the TNU, Prof. Benno Roozendaal.

Object recognition paradigm (also known as novel object recognition task) is a widely used behavioral paradigm that assesses memory performance in rodents. This paradigm takes around a week, and consists of three experimental phases: habituation, training and testing. During the habituation phase (3-5 days), rodents undergo several handling sessions in which they get habituated to being picked up from the cage, to the experimenter and the experiment room. This way, any stress due to handling that may influence the execution of the task during the training day is minimised.

During the training, animals are allowed to freely explore a set of two identical objects in a certain environment and are expected to learn the identity of these objects. On the testing day, one of the objects in the environment is replaced by a new, previously-unseen object. Since rodents are naturally curious and innately show a preference for novelty, if the animal remembers the previously-seen familiar object, it will spend more time exploring the novel object. The amount of time exploring the novel compared to the familiar object therefore gives an indication of the object recognition memory performance.

The object recognition paradigm can be further modified to test different aspects of the memory. Spatial object recognition paradigm, also known as object location paradigm, assesses the spatial memory (i.e., location of the objects in an environment) performance in mice. In this version, instead of changing one of the objects with a novel one, the spatial location of one of the objects is altered during the testing day. Object-in-context task is another modified version of the paradigm which allows investigating object-context associations (e.g., table in the kitchen, sofa in the living room).

Contextual fear conditioning is a widely used behavioral paradigm based on Pavlovian-like learning that assesses episodic memory (i.e., memory of events with the details of location and time) performance in rodents. The task takes around a week, and consists of three experimental phases: habituation, training and testing.

During the habituation phase (3-5 days), rodents undergo several handling sessions in which they get habituated to being picked up from the cage, to the experimenter and the experiment room. This way, any stress due to handling that may influence the execution of the task during the training day is minimised. During the training day, animals are placed into an experimenting box and explore the environment freely, but receive a mild footshock close to the end of the exploration.

Therefore, during this day the animals learn that the context is associated with the unpleasant, fearful experience. During the testing day, the animals are placed back to the fear-associated context, and the degree of their freezing behavior (e.g., expression of fear) is measured as an indication of memory performance. Longer display of freezing behavior indicates a stronger memory. Testing is sometimes followed by placing the animals to a novel,  safe context in order to determine the specificity of the fear behavior. If the animals accurately remember in which context they experienced the footshock, they should display a fear behavior specifically in the fear-associated context, but not in a novel context.

This task is critical to gain insight into the brain mechanisms that underlie stress-related anxiety or memory disorders, such as phobias and post-traumatic stress disorder (PTSD). Such stress-related memory disorders are characterized by low specificity of the fear memory that induces fear memory recall in safe environments. By investigating how fear memories are stored in the brain, and what ensures their specificity by the use of rodent behavioral paradigms such as contextual fear conditioning researchers aim at expanding the understanding of fear-related disorders and how we can treat them.