My name is Johannes, originally from Germany, for more 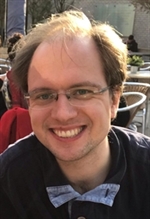 I’m a third-year PhD student located at the Department of Neuropsychology at the DCC. I don’t do neuropsychology though, but work with Hanneke den Ouden on reinforcement learning and decision-making.

What is the topic of your PhD project and what does a working day in your life look like?

I’m interested in the opposing nature of rewards and punishments. Many people might think that the lack of reward is just the same as a punishment, and vice versa. That’s not the case. People behave very differently when they try to gain rewards compared to when they try to avoid punishments. Rewards make you nervous, agitated; you want to actively do something to get them. In contrasts, punishments paralyze you. These behaviors are called “motivational biases” and might explain the genesis of certain psychiatry disorders, like addictions or social anxiety.

For my first projects, I used computational modelling and simultaneous EEG-fMRI recordings to see when and where in the brain these biases are implemented, and how they are controlled. That involves a lot of coding and interfacing data in different modalities with different pieces of software. In the future, I plan to look whether people might be “aware” of these biases and can use them in environments in which they are beneficial.

What did you want to be when you were younger?

As a kid, I wanted to become an “inventor” and invent new machines (I thought it would work similar to building new machines with Lego stones). At some point I realized that most useful things had already been “invented” ¯\_(ツ)_/¯. Afterwards, I had many interests, but no clear idea until the end of high school. Working in a psychiatric context and reading about psychological approaches to moral dilemmas made me choose psychology in the end.

What has your career path been so far and how did you come to your current position?

I did my Bachelor’s degrees in psychology and philosophy with a minor in math in Jena in Eastern Germany. I then spent a year in Helsinki, Finland, and felt that I could also imagine doing my Master’s degree abroad. The question was whether to continue in psychology or philosophy, and which of them I could imagine doing in the long term. In the end I went for psychology, because I preferred working on several smaller projects rather than lengthy books, and because I felt that in psychology, you reach a bigger scientific audience. I then discovered the research master’s degree in Behavioral Science at Radboud here in Nijmegen. At the end of my degree, I was lucky that Hanneke had an open position that quite neatly fitted my interests, so I was very happy to stay for four more years.

What excites you about working in science?

It always appeared weird to me that my university degrees should suffice to prepare me for the remaining 30, 40 years of my work life. In science, you keep on learning new things and stay up-to-date with the current state of knowledge, which I really like. Also, it appears weird to me to do the same work for several decades. In science, you work on constrained projects for a few years, but keep moving your interests into new directions.

What aspect of your job is or has been a challenge for you?

My “need for cognition”: I often find neuroscience overly descriptive, with little functional or systematic explanations of why or how certain brain regions are involved in certain cognitive operations. Also, data is usually messy and inconclusive and projects take very long, which leaves me dissatisfied, and made it hard for me to finish my first projects. But I think I’ve realized by now how difficult doing neuroscience is, and that it needs quite a long line of research to get a convincing and comprehensive stream of evidence.

I like surprises and new experiences—so my perfect weekend would probably not be “business as usual”. I like exploring the Netherlands, by bike or by train, often without a clear idea what I’ll end up doing. In general, I like “active” weekends, either doing trips by myself or together with friends. We recently went camping in Germany in late October, which I wouldn’t recommend—but It’s really nice in summer! I can definitely recommend taking the bike to Brabant, Amsterdam, or the Ijsselmeer, and explore what you see and find on the road!

What is the most important advice you want to share with Donders PhD candidates?

Another issue I find challenging: Doing a PhD can feel like reinventing the wheel—you do something you think someone else has probably done before (e.g. collect certain data, written certain code), and you might profit from that work—but you either cannot find it or it’s unavailable to you. I find it frustrating to then redo this work. Thus: Make all your data and code available, even if a project didn’t work out, and document it in a way people can find it! Also: Dare to directly e-mail people and ask for data/ code—they might be surprisingly helpful and give you tips not contained in their papers!

Is there a project or anything you're involved with that you'd like to promote?

Yes: The Open Science Community Nijmegen (OSCN; check out https://openscience-nijmegen.nl)! We just started with our launch event in October, and had another Do-a-thon where we worked together on improving our webpage. Sign up for our newsletter to stay tuned on our future events and projects, and contact us if you have own ideas or something you’d like to initiate/ contribute to!