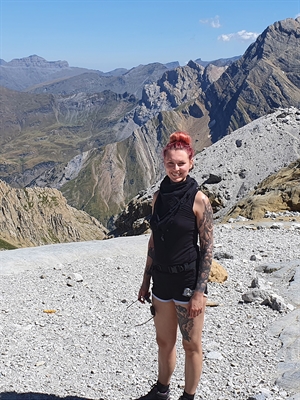 What is the topic of your PhD project and what does your work look like in practice?
The goal of my PhD is to generate retina-like structures called retinal organoids from a human CRISPR-corrected induced pluripotent stem cells and I spend way too much time at the fume hood. I feel it is rather similar to gardening if gardening would involve human organs.

What did you want to be when you were younger?
In my late teens, I wanted to be a commercial airline pilot as they get to travel for free, drive powerful vehicles, and see some killer sunsets. I even called a Russian flight academy to ask about their enrolment procedure. In the best post-soviet patriarchal fashion, the grumpy elderly secretary informed me that: they never received enrolments from girls, I won’t pass the physical, and they don’t even have female toilets. I tried to persuade them that: I am not that terrible feminine, more athletic than I look, and all-around an adventurous pisser, at which point they hang up on me. This accident put a halt on my flying career, much to the relief of my dear old mother who has a flight phobia. When I get awfully rich doing science, I might get a small biplane of my own.

What has your career path been so far and how did you come to your current position?
I have started with a bachelor's in chemistry to quickly switch my major to biology where novel discoveries seem to be happening on a more regular schedule. I got especially interested in the workings of the human brain and spend a semester in VU Amsterdam, doing minor in neuroscience, followed by a bachelor internship in Paul-Flechsig-Institut for Brain Research in Leipzig where I helped developing a tau protein detection essay in Alzheimer’s.
I move to Dresden for a Master’s in regenerative medicine in TU, where I got fascinated with embryogenesis, particularly patterning of the germ layers, and also about the plasticity of adult animal tissue. During this time, I learned about iPSCs and CRISPR-Cas9 and their potential to generate and edit human tissue in an ethical way. I looked for PhD position where I could become an expert in these techniques and found one advertised by Radboudumc, in relation to the retina, which, as I reckoned, was a tiny light-sensitive brain with weirdly inverted signalling and not a massive step away from the neuroscience field ( as you might have guessed it’s much more interesting than that). I got employed shortly before graduating and moved back to the Netherlands in 2017.
I had a bit of a bumpy road to arrive at where I am now, but I believe in the importance of finding and doing what you enjoy. Science-wise, I think the next interesting project would be to get an experience of differentiating iPSCs into organoids of other germ layers.

What excites you about working in science?
I am always excited about an opportunity to poke nature with a stick and see what happens and if that happens every time.

What is your favourite book and why?
My favourite book series is the Discworld by Terry Pratchett. I grew up on his observations of the everyday world that bring humour and magic into it and I have always been in love with the city of Ankh-Morpork that is chaotic, constantly moving, and ultimately alive. The world has gotten much poorer when he died of Alzheimer's in 2015.

What is the most important advice you want to share with Donders PhD candidates?
Try everything once, find what you enjoy, and stick to it for a while. And take breaks while you are on it, as they say “all work and no play makes Jack a dull boy”.

Is there a project or anything you're involved with that you'd like to promote?
I think it would be appropriate to give a shout-out to Proefdiervrij, an animal advocacy organization that kindly supported part of my retinal organoids project. They are a non-profit organization helps funding projects that can decrease the use of animals in science.

What are you looking forward to in life?
These 4 years of the PhD is the longest I have ever been stationed somewhere in my adult life, and I am very much looking forward to traveling again, exploring new cultures, and starting new projects.