Why millions of African children have no birth registration

In large parts of Africa, over half of all children lack a birth registration. These children therefore cannot claim essential human rights. A new study by Anne Lieke Ebbers and Jeroen Smits of Radboud University identifies the factors that are responsible for this registration problem and provides suggestions on how this far-reaching problem can be addressed. The study is published today in PLOS ONE.

The United Nations considers registration at birth to be a human right. Unregistered people do not exist in government systems and therefore cannot make claims to essential rights, such as access to education, healthcare and protection by the law. Yet in many countries, under-registration is still a huge problem. According to UNICEF, there will be 100 million unregistered children worldwide by 2030, unless significant steps are taken.

“Governments and organizations like UNICEF are trying to increase birth registrations by focussing on issues such as poverty, education and women’s rights. However, our research reveals that lack of registration is also related to characteristics of the larger environment in which people live,” Ebbers explains. “For example, there are large differences between children born in urban and in rural areas and the kind of registration system a country uses plays a major role as well.” 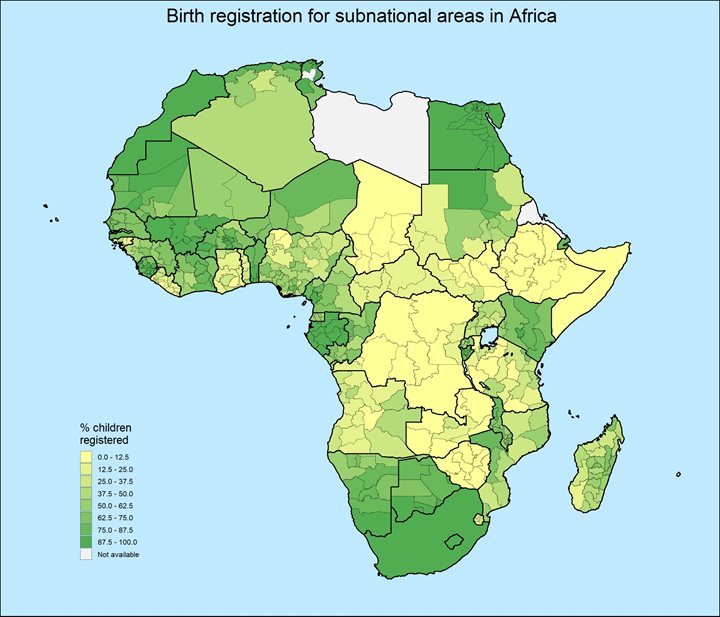 Sometimes birth registration is complicated due to a combination of factors. Ebbers: “For example, in some countries, registration offices are mainly located in cities and hardly available in rural areas. In combination with an often poor infrastructure, restricted freedom of movement of women, and the fact that in some countries a registration fee has to be paid, the number of obstacles becomes considerable. UNICEF therefore has made registration of all children one of its main priorities. By investing in better accessible registration systems many future problems for children and adults can be prevented.”

The role of context

The study uses data from the Global Data Lab on 350,000 children in 40 Sub-Saharan African countries. Using such a large number of children and countries made it possible, for the first time, to not only include factors at the household level, but also factors at the level of the local and national context. “Our analyses revealed that factors at all three levels are important. For example, we found that in countries with centralised registration systems and with registration fees the levels of registration are significantly lower,” says Ebbers.

“In addition, the availability and organisation of local reproductive health services may play a role of importance. Health workers can already point out the importance of registration during pregnancy and at delivery, and during later check-ups verify that the child has actually been registered. However, this requires the availability of effective healthcare services, which, unfortunately, often are lacking in the more remote areas of these countries.”

According to Smits, the study reveals that the birth registration problem is more complex and nuanced than is often thought, and that for finding solutions the larger context in which families live should be considered too. “We see that context factors explain about 40% of the variation in registration rates. However, the current approaches focus mainly on factors at the household level, such as poverty reduction and information provision. This is also important, but it is not enough to reach ‘legal identity for all’, one of the main targets of Sustainable Development Goal 16. If we want to get all children registered at birth, we need to look at the larger context in which families live as well.”