Radboud University collaborates with seven other European universities in the European Universities Initiative. The collaboration starts in the areas of brain research and technology, but the aim is that it will expand further to other areas of research. 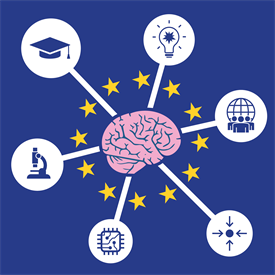 The participating universities are

In addition, more than 250 European research institutes and organizations are involved.

Daniël Wigboldus, president of the Executive Board of Radboud University: '"We are enthusiastic about the alliance together with seven excellent partners from all regions of Europe and are committed to long-term cooperation in the field of education and research, starting with brain and technology."

Exchange of education, research and employment

The European Universities Initiative facilitates the exchange of education, research and employment. This means that students can take lessons at all the institutions involved, not constrained by institutional capabilities and borders. They can thus gain international experience and benefit from the specific expertise of the various universities. For scientists, it will lead to the improvement of education they provide and to smoother cooperation in research.

In this way, the initiative trains new researchers and engineers at the highest possible level, with a background and network in several institutes. This improves Europe's position in brain research and engineering, and provides well-educated people to tackle future problems in society.

NeurotechEU, The European University of Brain and Technology

Brain disorders are a leading cause of disability and a significant burden on society. In Europe alone, brain-related diseases - such as dementia, loss of sight and depression - account for almost a quarter of all health problems. With the senior population growing ten times faster than the rest of the world’s population, this is expected to increase further in the coming years.

Therefore, the European Universities Initiative will focus on neurosciences and technology development as its first goal in NeurotechEU, and will expand its focus across disciplines to maximize European potential in education, research, innovation and creativity. The prestigious group of universities will spend 5 million euros to build a trans-European network of excellence in brain research and technologies.

According to the initiator and lead of the project, Tansu Celikel, chair of the Donders Institute for Brain, Cognition and Behaviour and Professor of Neurophysiology at Radboud University, the collaboration will have far-reaching impact beyond education and research. “The new European University will actively work to cherish diversity and promote a common European identity among students and researchers with multicultural, multilingual, international and intersectoral experiences across the European continent.”

NeurotechEU, The European University of Brain and Technology, is a virtual university that brings together 8 universities, 170,000 students, 70,000 employees and a budget of 231 million euros.

European cooperation, with an eye to the future

The idea is to make education in Europe competitive and future-proof. International cooperation between universities, research institutes and companies within a specific field of science guarantees high-quality education and research.