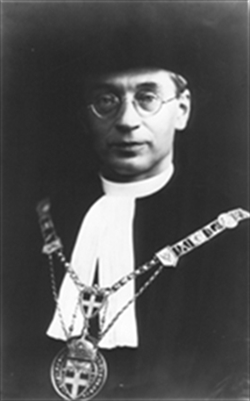 On Friday March 4 Pope Francis announced the canonization of the Nijmegen professor and priest Titus Brandsma.

The actual canonization will take place on May 15 in Rome

Titus Brandsma (1881-1942) was Rector Magnificus and Professor of Philosophy at Radboud University. He died in Dachau concentration camp, some six months after he had been arrested by the Nazis for his resistance to National Socialism.

In November 1985 he was beatified in Rome by Pope John Paul II. And in 2005 he was elected greatest Nijmegen citizen of all time.

>  Nijmegen professor and priest Titus Brandsma to be canonised
> How does a canonisation work?
> Dutch website on canonisation

Who is Titus Brandsma?

Titus Brandsma was born Anno Sjoerd Brandsma on 23 February 1881 in Ugoklooster, near Bolsward. Titus was the monastic name he took upon entering the Carmelite order.

Brandsma was a man of many talents. He was not just a Carmelite priest, but one of the first professors of Philosophy and rector of the Nijmegen Catholic University. A leading figure in the rediscovery of Dutch mysticism, a mystic himself, an undervalued theological high flyer and yet close to ordinary people. Not least, he also became known as a hero of the resistance.

Who is Titus Brandsma?

Dr. Elisabeth Hense T.OCarm., associate professor for spiritual theology at Radboud University Nijmegen, is working on an English-language edition of the collected works of Titus Brandsma in seven volumes. Many texts included in the collected works of Titus Brandsma have never been published before, not even in Dutch. Dr. Hense is providing the English edition together with her co-editor Joseph Chalmers. All texts are introduced, annotated and placed in context.

This project receives funding from Radboud University and the International Order of Carmelites.

Inigo Bocken, Ineke Cornet and Coban Menkveld are currently working on an intellectual biography of Titus Brandsma. They focus on Brandsma’s role as a Professor of Philosophy at the Nijmegen Catholic University and as a publicly committed intellectual.

The Titus Brandsma Institute (TBI) was founded in 1968 by Radboud University and the Nederlandse Karmelprovincie. The TBI researches Christian mysticism and spirituality in the spirit of its namesake Titus Brandsma.

The study of spiritual culture past and present, and of the various ways in which people have given form and substance to their spiritual journeys, is central to the TBI.

On 17 October 1923, Radboud University was founded, at the time still under the name of Katholieke Universiteit Nijmegen. Dutch Catholics wanted to promote the emancipation of Catholics in the Netherlands by founding their own university. Titus Brandsma was Professor of Philosophy from 1923 and Rector Magnificus from 1932-1933.

Within Radboud University, the Faculty of Philosophy, Theology and Religious Studies (PTRS) occupies a special place. Students learn to reflect on philosophical issues in this faculty. They are trained to be critical and committed academics who can take up responsible positions in society with well-considered perspectives on academia and society.