Nijmegen professor and priest Titus Brandsma to be canonised

The Catholic Church announced today March 4 that Pope Francis will canonise Nijmegen's Titus Brandsma (1881-1942) on May 15. Brandsma was Rector Magnificus and Professor of Philosophy at Radboud University – known then as the Catholic University of Nijmegen. He died in Dachau concentration camp, some six months after he had been arrested by the Nazis for his resistance to National Socialism. In 2005, he was voted Nijmegen’s Greatest Citizen of All Time. 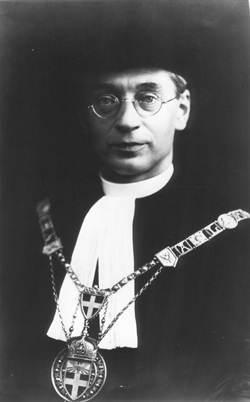 Rector Magnificus Han van Krieken responded as follows to the news: “We see the canonisation of Titus Brandsma as exceptional recognition for his life, which was lived in the service of his faith as well as his concern for his fellow human beings, and which was characterised by his high moral standards and courage. Brandsma was an advocate for justice and truth in society. For him, the common good always took priority over self-interest and prestige. He fought against a system of oppression, discrimination, lack of freedom and inhumanity. In that, he is an example for many, up until this very day.”

Brandsma was born on 23 February 1881 near Bolsward, a scion of a line of Frisian farmers. His first names were Anno Sjoerd. When he entered the Carmelite Order in 1898, he took the name Titus as his religious name, the name of his father. Brandsma was ordained as a priest in 1905.

Carmelite father, teacher, academic and journalist
Brandsma received his doctorate in Philosophy in Rome, taught in Oss at the Carmelite study centre and was made professor at the Catholic University of Nijmegen in 1923 with, among others, History of Philosophy and History of Mysticism in his teaching and research remit. He specialised in Medieval Mysticism and the History of Piety in the Netherlands. His unique collection of reproductions of medieval mystic manuscripts formed the basis for the Titus Brandsma Institute of today in Nijmegen. In the academic year 1932/1933, Brandsma was made Rector Magnificus of the University. 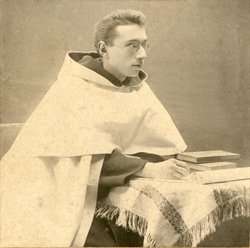 Brandsma founded the Doddendaal monastery in Nijmegen and initiated numerous social activities. He launched two magazines and was editor-in-chief of the local newspaper, De stad Oss. Journalism was a major part of his life. He perceived an outstanding ‘modern’ opportunity in it for providing spiritual life with a place in an already secularising society. He penned articles on Dutch piety for De Gelderlander. He devoted himself among other interests to the emancipation of Friesland (language and culture), to the emancipation of Catholics in Friesland in particular and to the further development of Esperanto. He also travelled the city and the country, lecturing on mysticism. 'Mystic with a railway subscription' is what the author Godfried Bomans called him.

National Socialism
He foresaw the dangers of National Socialism. which was on the rise then, at an early stage and devoted several lectures to the subject. During the German occupation, he was able to persuade catholic newspapers and magazines not to accept advertisements from organisations close to the national socialist ideology. He did this with agreement from and at the behest of Archbishop Jan de Jong. This led to his arrest in January 1942. A trail of torment through Scheveningen prison, Camp Amersfoort and Kleve prison finally took him to Dachau concentration camp.

Witnesses without number have related that Titus was, under extreme conditions, an example to his fellow prisoners, to whom he offered support in maintaining their inner dignity. Worn out by the harsh conditions, he died in the concentration camp on 26 July 1942. His ‘incorruptible Christian life and his faith in God’, during this his last journey as well, were decisive for his beatification in 1985. 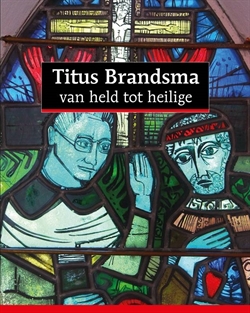 Titus Brandsma, from hero to saint
Academics of Radboud University, the Faculty of Theology, Philosophy and Religious Studies and the Titus Brandsma Institute have published the book Titus Brandsma. From Hero to Saint to mark the canonisation (published by Adveniat). This volume portrays Brandsma from different perspectives: as a professor and Rector, as an intellectual, as a Dutch mystic and as a resistance fighter. In the first chapter, Christoph Lüthy describes the background to the canonisation. A pdf-file of the first chapter of the book is (in Dutch) available on www.titusbrandsmaheilig.nl.

Public event and bookpresentation March 16
On the event of the canonisation, the University is preparing a number of activities  ̶  some in cooperation with the Titus Brandsma Institute  ̶  including an academic session in the Aula. On Wednesday 16 March, 8.00 pm to 9.15 pm, Radboud Reflects is organising a public programme (in Dutch) in which various Radboud academics will reflect on the how, what and why of this canonisation. Prior to this, the book Titus Brandsma, from hero to saint will be presented. There is a small exhibition about Titus Brandsma as a professor of the Catholic University at the entrance to Radboud University’s academy building, the Berchmanianum.

Titus Brandsma Institute
The Titus Brandsma Institute, housed in the Erasmus building of Radboud University in Nijmegen, conducts academic research into Christian mysticism and spirituality. As a centre of academic research, the institute dedicates itself, in the spirit of Titus Brandsma, to educational and formative initiatives aimed at a broad public. It was established in 1968, on the basis of a cooperative agreement between Radboud University and the Dutch Province of Carmelites.