Those Radboud University students and staff who study and/or conduct research in the fields of feminism, religion and gender may now apply for a subsidy from the Nijmegen Feminism and Religion Fund (NFRF), part of the Radboud Fund. Those international students and academics who do part of their studies or research in these areas in Nijmegen are also eligible.

“There is still a great deal of fine, interesting research to do into feminism and religion. In addition to Christian feminist theology tradition, there is also Islamic feminism. How do the various currents in it express women’s liberation? What is 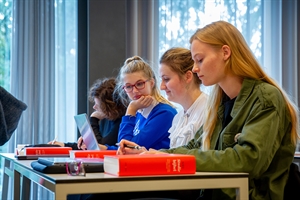 the relationship between the pious body of thought of Jewish, Christian or Muslim women and women’s liberation? If you are a student or a researcher and you would like to organise research activities involving feminism, religion or gender, you may approach the NFRF,” according to Karin van Nieuwkerk, an Islamic Studies professor and a member of the NFRF’s advisory committee, which assesses applications.

The NFRF was established with its origins in the former Stichting Nijmeegs Ondersteuningsfonds Feminisme en Religie (NOFR). The former NOFR executive board members, Prof Toine van den Hoogen and Dr Grietje Dresen, who are now members of the advisory committee, are pleased with the move to Radboud Fund: “The fund is in good hands at the Radboud Fund. It was established in 1991 to provide education and conduct research involving feminism and Christianity at the university. By entrusting the NOFR’s remaining balance to the Radboud Fund, it is possible to pursue the fund's objects more widely and professionally, and it will become easier to find it. Naturally, we now interpret ‘religion’ as involving more than only Christianity, although we do abide by the original, liberating approach encompassed in the term, ‘feminism’. That liberating approach remains a criterion when assessing applications.”

What projects may qualify for a subsidy?

An NFRF subsidy is intended for those expenses which are not covered by a faculty. Think of attending a conference, inviting a guest speaker, publication costs, travel expenses and so forth. Payroll costs do not qualify. The maximum subsidy amounts to €2,500.00 per application.

Applying for a subsidy

If you would like to apply for a subsidy, you may contact Lisette Pals at lisettte.pals@ru.nl.
There are two subsidy rounds per annum. The deadline for the first round is 1 July and for the second, 1 December.