Sub-project: The climate change mitigation potential and trade-offs of bioenergy

Modern bioenergy is defined as any form of energy outside our bodies that is derived from ‘biomass’ (i.e., recently living biological materials) and that is subsequently processed into modern energy carriers like electricity and transport fuels. Bioenergy can be renewable and can be used in many applications within our existing energy infrastructure. It can also provide a way to use wastes and residual biomass, for example from agriculture or forestry. There are sustainability concerns too though, mostly related to the water, land and nutrient requirements of specifically growing crops, trees or grasses to produce bioenergy. In terms of climate change, the uptake of atmospheric CO2 in growing biomass means that the net greenhouse gas (GHG) emissions of bioenergy can be lower than those of, for instance, fossil fuels, but GHG emissions from land-use change (LUC), biomass cultivation, processing and transport should also be accounted for in such comparisons. When bioenergy is combined with carbon capture and storage (BECCS), CO2 produced at the power plant or biorefinery is largely captured and geologically stored rather than emitted back to atmosphere. This can result in so-called net ‘negative emissions’.

The main aim of this sub-project within the SIZE project is to assess the potential and trade-offs of using energy from residual biomass and from purpose-grown lignocellulosic biomass (trees and grasses) to mitigate climate change. Specifically, two research questions were considered:

The first line of research (studies 1-3) assesses the climate impacts of bioenergy by also considering alternative uses of biomass and the counterfactual products they would replace in the conventional economy. This line of research concerns bioenergy from residues and existing tree plantations considered in the short to medium term (0-30 years) and with a regional focus. The second line of research (studies 4-6) assesses the potential global contribution that bioenergy and BECCS could have towards mitigating climate change in the 21st century, while also exploring its potential biodiversity impacts. It has a longer-term perspective of 30 to 80 years.

This regional case study considers biomass from pine plantations in the US south-east that is converted to wood pellets for electricity generation in the Netherlands. Based on life-cycle assessment, carbon modelling and forestry data, it is shown that the use of this biomass for electricity production can lead to lower GHG emissions than (a combination of) alternative uses and fates, such as paper and panel board production or leaving biomass in the field. The findings account for both the counterfactual electricity production (the Dutch electricity mix that would be replaced by wood-pellet electricity) and counterfactuals for the alternative uses of biomass (e.g., gypsum board that could be replaced by panel boards). Specifically, it is found that the use of thinned trees, logging residues and saw mill residues for electricity has lower emissions within 0-6 years compared to alternative uses (Figure 1). The reason for this delay in climate benefits is that the alternative biomass fates perform better in the short run, due to for instance temporary carbon storage in alternative products or gradually decomposing biomass in the field. For roundwood, on the other hand, achieving net benefits for electricity may take up to 28 years. Overall, the study shows that wood pellet electricity sourced from the right feedstocks can lead to climate benefits in the short run. It also demonstrates that considering alternative biomass uses and their counterfactuals can be critically important in assessing the climate benefits of bioenergy.

Figure 1 | The use of various pine plantation-based feedstocks for electricity production in the Netherlands versus alternative local uses.

This study compares the potential climate impacts or benefits of using residual wood and grassy biomass from Dutch river floodplain management for various bioenergy and biomaterial options, accounting for their counterfactuals. The comparison is based on life-cycle assessment and (energy) systems analysis, but also on stakeholder interviews to identify biomass uses and their counterfactuals. Energy applications of biomass, such as biogas from grass or combined heat and power from wood, typically result in larger climate benefits (0-132 kg CO2-eq. saved per tonne of biomass) than material applications (ranging from 43 kg CO2-eq. saved to 62 kg of additional emissions per tonne of biomass), or leaving biomass on site (32-176 kg CO2-eq. emissions per tonne of biomass; Figure 2). Furthermore, woody biomass usually outperforms grassy biomass on a dry tonne basis. Climate benefits are defined here as net avoidance of GHG emissions by replacing a counterfactual. The reason energy applications usually perform best is precisely because their counterfactuals are currently still fossil fuel-based and GHG-intensive. One exception to these findings is the use of grassy biomass to replace peat as a growing medium, which has large climate benefits, due to large impacts of using natural peat. All in all, the analysis shows that including counterfactuals allows for comprehensive comparison of alternative biomass uses and that bioenergy applications from residual biomass can have the larger climate benefits than other uses. 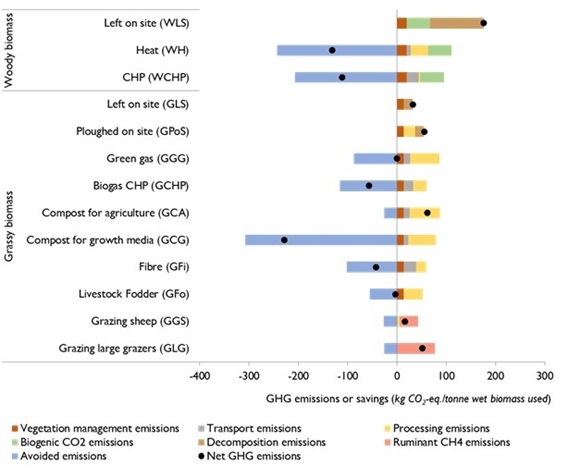 This work builds upon the previous two studies and presents a formalised four-step methodology to assess the environmental benefits of utilising any residual energy or material flow. The approach consists of: i) identifying the residual flow, ii) identifying different uses of a residual flow and quantifying their environmental impacts, iii) selecting an accurate counterfactual for each of these uses, and determining its environmental impacts, and iv) comparing the different uses, including their counterfactuals, per amount of residual flow utilised, and optionally defining one of these uses as a benchmark ‘zero’ option (Figure 3). This approach allows comprehensive comparison of different applications and optimal use of a residual flow. 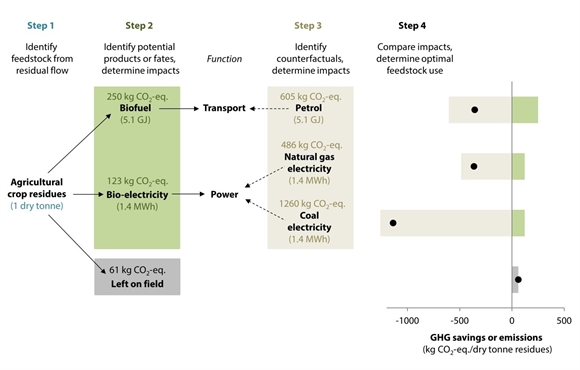 This study focuses on the global amount of agricultural and forestry residues that can be supplied for bioenergy over the 21st century, based on eight integrated assessments models (IAMs). These IAMs model the economy, biosphere and atmosphere in conjunction and allow exploring what the global energy system and economy would have to look like to achieve climate targets. The comparison reveals large inter-model differences, but generally shows that residues could cost-competitively play a large role in the twenty-first century bioenergy supply. The quantities of residues supplied in the models largely fit within previous estimates residue availability for bioenergy, which are based on trends in population size and consumption, and average at 55 EJ of primary energy in the year 2050 (Figure 4). Important observed dynamics include that a higher bioenergy demand results in more residues being diverted from competing biomass uses, and that carbon pricing and land protection efforts increase the relative affordability and use of residual biomass. Logistical and wider sustainability constraints of large-scale residue use for bioenergy, however, require additional research. 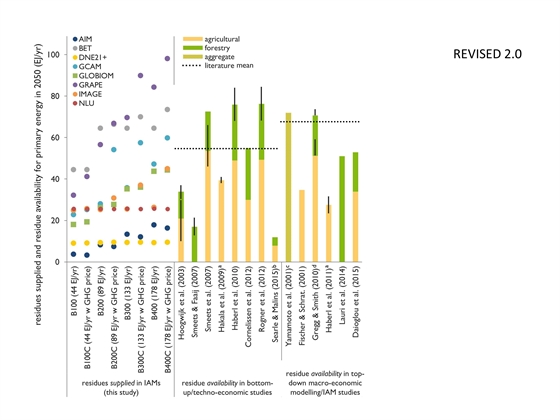 Figure 4 | Comparison of the quantity of residues supplied for energy in 2050 in IAMS versus expected residue availability for 2050 in literature. GLOBIOM projections (in green squares) only include forestry residues. Literature means are calculated as the mean availability of agricultural residues plus the mean availability of forestry residues (both including processing/secondary residues). Error bars indicate minimum and maximum values where provided in literature. Notes: a. excludes processing residues; b. very strict sustainability criteria; c. includes animal dung; d. only subject to ecological constraints (i.e., no economic constraints).

This study provides a global and spatially-explicit analysis of the (negative) GHG emissions of lignocellulosic crop-based BECCS. The analysis is based on the global vegetation model LPJml combined with life-cycle GHG emission data. It shows that crop-based BECCS could biophysically provide large amounts of energy with negative GHG emissions, but requires large amounts of land too (Figure 5). Furthermore, it is demonstrated that (more) negative emissions are typically achieved when: i) cultivation locations are selected with relatively high crop yields and low initial vegetation carbon stocks (often in warmer temperate and sub-tropical areas), ii) initial vegetation is not burned, but instead used for additional bioenergy production, iii) electricity is produced rather than liquid fuels, as it has a relatively high carbon capture rate, and iv) the BECCS system is operated and evaluated over a longer time period. As a final step, it is shown that the projected negative emissions from BECCS in two climate change mitigation pathways for 1.5 ᵒC (S2 and S5) could biophysically be approached. However, considering the potentially very large associated land requirements, substantially less and earlier deployment of BECCS is recommended. 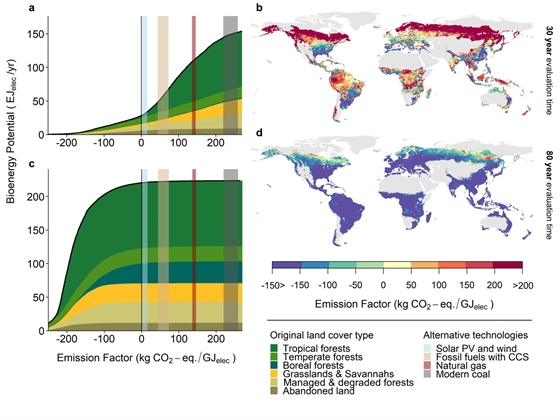 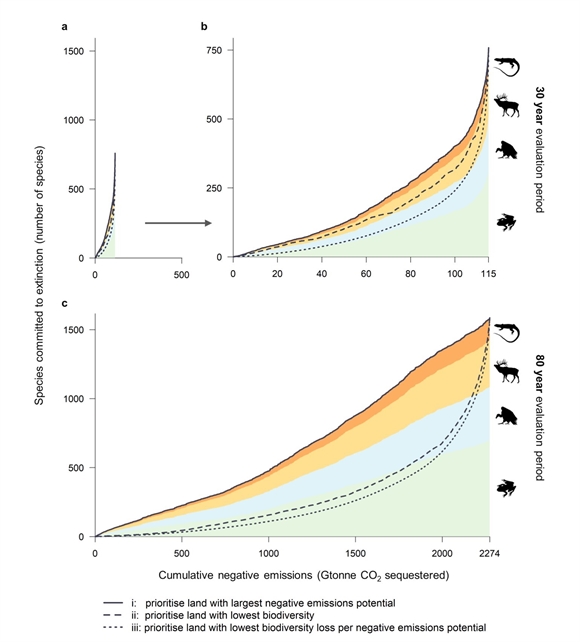 Figure 6| Potential global loss of terrestrial vertebrate biodiversity as a result of land-use change for BECCS. The amount of species that become committed to extinction are shown as a function of cumulative negative emissions from crop-based BECCS. Results are shown for a. a 30 year evaluation period, b. a scaled version of the 30 year results (note the different axes), and c. an 80 year evaluation period. The relation between biodiversity loss and negative emissions differs depending on which land allocation criterion (i-iii) is used. Results are displayed here in different colours for the four classes of terrestrial vertebrates: reptiles, mammals, bird and amphibians, shown as based on criterion i.