For effective conservation of biodiversity, it is important to promptly identify populations most vulnerable to extinction. Extinction risk can be assessed using Population Viability Analysis, however this approach requires large amounts of demographic data. For birds and mammals, species traits, such as body size, have been successfully used as proxies of extinction vulnerability. Allometric theory predicts that many demographic parameters are related to body size through the scaling of metabolic rates. The main goal of this study was to develop allometric relationships between plant height and plant population demographic parameters that can be used to estimate plant extinction risks for a large number of plant species.

This study quantified the allometric relationship between the intrinsic rate of population increase and maximum plant height as well as the relationship between the variance in population growth rate due to environmental stochasticity and maximum plant height. The results show that large plant species have lower intrinsic rates of population increase (figure 1). Additionally, large plants are less susceptible to environmental stochasticity. These trends could not be explained by differences in plant growth form. 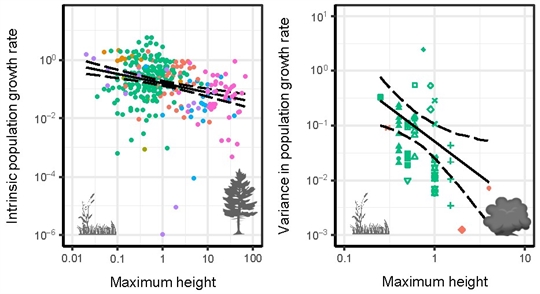 Using these allometric relationships to calculate the intrinsic probability of extinction of vascular plants as a function of maximum plant height shows that larger plants are less vulnerable to extinction than smaller plants (figure 2). This is mainly due to smaller species being more vulnerable to environmental stochasticity. However, the results of this study were highly uncertain indicating that plant height alone is not enough to reliably estimate the extinction vulnerabilities of plants. 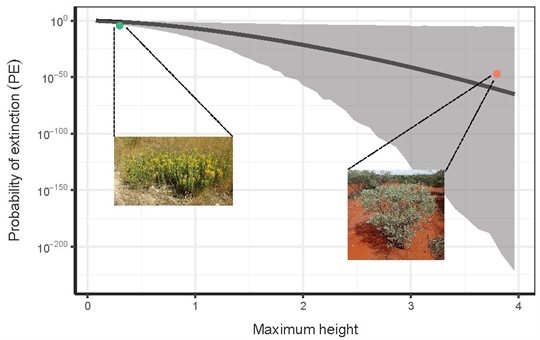 Figure 2: The probability of extinction (PE) as a function of plant height calculated using the relationships between demographic rates and plant height derived in this study. Solid black line shows the median PE and shading shows the 90% confidence interval of the Monte Carlo simulations. Two plant species for which the PE could be calculated directly are shown, left: Solidago mollis and right: Eremophilia maitlandi.

To determine the suitable habitat for vascular plant species under climatic change, species distribution models are commonly used. These models make use of widely available species occurrence data, together with climate, topographic and soil data to determine species’ environmental niches. These models are then used to determine where the species might occur currently and in the future. However, this approach neglects the indirect effects that climatic change may have on species’ occurrences through changes in species’ interactions.

For example, stress-gradient hypothesis (SGH) postulates that species interactions shift from competition to facilitation with increasing abiotic stress. While interactions between species are increasingly being recognized as important drivers of species distributions, it is still unclear whether expectations of the SGH affect continental to global-scale species distributions. The goal of this study was to test if the effects of shifting interactions between species are noticeable from large scale species occurrence data.

This study used the occurrence data of 168 grassland species in Europe to estimate residual spatial associations (those associations that cannot be explained by the environment) as a function of the climatic water deficit (CWD) using context-dependent Joint Species Distribution Models (JSDMs). This showed that associations of drought sensitive species are increasingly positive in high drought stress environments as would be expected from the SGH. These results indicate that stress-modulated species associations may influence the distribution of species over large geographical extents and future climate change may lead to unexpected responses through shifts in species’ associations.