The world’s vegetation greatly supports the human population by providing e.g., clean water and air, recreation and spiritual inspiration, and food and natural building materials. In this time of global change, there is a need to better understand how the environment affects global vegetation distributions. Some species have the optimal set of attributes to survive and thrive in a location, while others do not. Those without an optimal set of attributes or those unable to adapt, will not survive and eventually will be excluded from that area. This so-called ‘filtering effect’ does not directly act on plant species, but on the traits of individuals. In trait-based models, plant traits are linked to local environmental conditions, where the relationships between them describes the filtering effect of climate, soil, disturbances, and/or biota. At the local and regional scale, a large body of literature exists that describes and/or quantifies this link as trait-environment relationships. However, the question of large-scale dependencies of traits on the environment remains unanswered.

The main goal of this sub-project was therefore to determine the role of environmental filtering on the distribution of terrestrial plant traits at large spatial scales. Specifically, this sub-project first provides a better understanding of how traits vary across large-scale environmental gradients (studies 1-3). Second, it tests the application of environmental filtering in order to predict more informative aspects of vegetation, such as structure and productivity (study 4). Third, it discusses the reliability of trait-based models in terms of uncertainties and how to reduce them (study 3).

Plant trait distributions find the basis in internal plant biomass allocation, which may be optimized to acquire and conserve resources in order to optimize survival. Understanding a plant’s carbon investment trade-offs may explain trait variation along different environmental gradients. In this study, the biomass allocation to above and below-ground traits of tropical savanna and forest tree seedlings were examined in a greenhouse experiment to test if they could explain the observed species occurrence along gradients of resources (light, water) and defoliation (fire, herbivory). Above-ground traits could differentiate savanna from forest species, mainly by their low and high shoot investment, respectively. On the other hand, below-ground traits allowed to classify species into dry savanna, humid savanna, dry forest and moist forest, mainly by a deep mean rooting depth, root starch investment, high specific root length in deeper soil layers, and high specific root length in the top soil layer, respectively. These results imply that root traits are important to consider when discussing plant trait variation along gradients of resources and defoliation, where tree seedlings from dry areas invest in deep roots, seedlings from shaded environments optimize shoot investment, and seedlings experiencing frequent defoliation store resources in the roots. 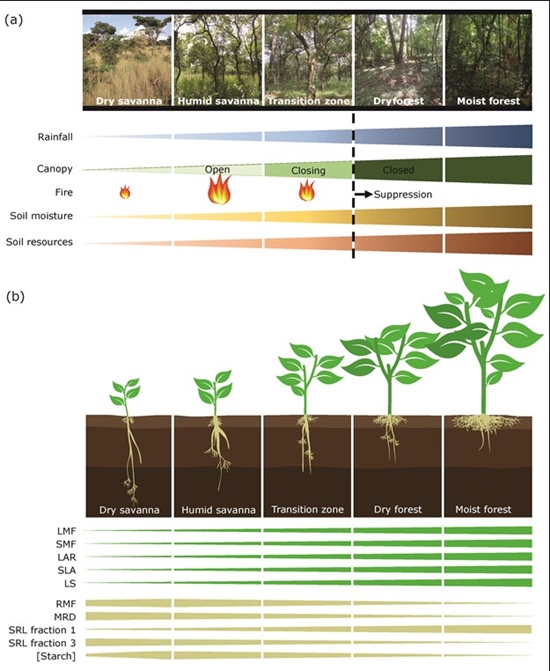 Figure 1: Overview of the vegetation types that are represented in this study with various environmental gradients (a), and the hypotheses for above-ground and below-ground traits (b). Abbreviations and descriptions of traits can be found in the publication.

The understanding of plant trait variation at large spatial scales is restricted by data availability and global community mean plant trait relationships with environmental variables are largely missing. In study 3, the current global distributions of four above-ground community mean traits were predicted using an ensemble modelling approach, and the the predictive performance of the models, the plausibility of predicted trait combinations, the influence of data quality, and the uncertainty across geographical space attributed to spatial extrapolation and diverging model predictions were assessed. The ensemble predictions of community mean plant height, specific leaf area and wood density resulted in ecologically plausible trait–environment relationships and trait–trait combinations. Leaf nitrogen concentration, however, could not reliably be predicted as this trait likely responds more to small-scale variation instead of large-scale environmental factors. Furthermore, predicting community trait means works best with high data quality (i.e., including intraspecific variability and a representative species sample) and an ensemble modelling approach compared to low quality data and any of the individual modelling techniques, respectively. These results indicate that global scale plant community trait–environment relationships can reliably be used to predict large-scale vegetation patterns. 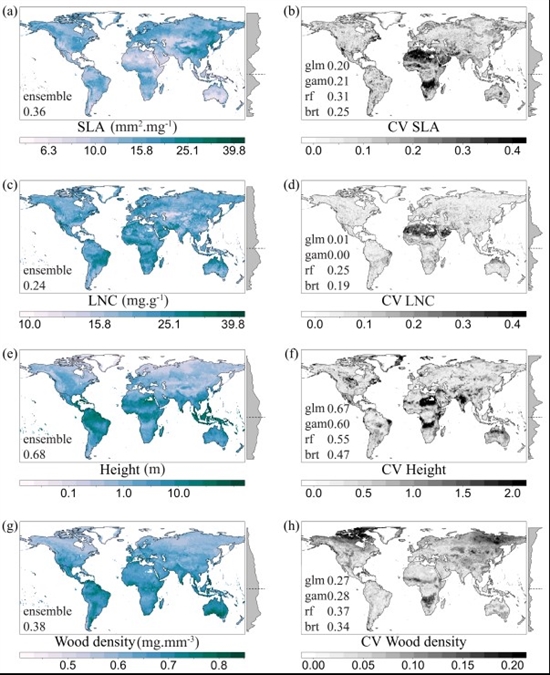 Figure 2: Global plant trait predictions. The left column presents the ensemble trait predictions, and the right column presents the ensemble coefficient of variation (CV) of different model predictions. The grey margin in each plot depicts the mean latitudinal value, and the horizontal dashed line indicates the Equator. Values in plots (a), (c), (e), (g) indicate the accuracy of the ensemble predictions (cross-validated R2). Values in plots (b), (d), (f), (h) indicate the predictive performance (cross-validated R2) of the different models, where glm indicates values of the GLMs, gam of GAMs, rf of RFs, and brt of BRT. These values indicate how well traits are predicted, while the CV maps only identify locations where predictions are divergent between models with high and/or similar predictive power. No predictions were made for Greenland (no soil data), nor for the south of Egypt (no precipitation seasonality). All predictions represent potential trait values, as not all terrestrial world is vegetated or includes woody vegetation. Abbreviations: LNC = leaf nitrogen concentration; SLA = specific leaf area.

Since plant community mean trait values vary along environmental gradients, trait-based models are increasingly being used to get a better understanding of climate change effects on vegetation distributions. While climate change effects on the global distribution of biomes have been discussed in process-based global vegetation models, the magnitude and direction of change are largely debated. Study 4 brings additional proof of principle on the usefullness of fully trait-based, correlative models, and provides novel insights of why global vegetation patterns may change. The effect of climate change on the global distribution of biomes was assessed by modelling future global distributions of plant community traits with the models of study 3 in combination with clustering trait combinations to probabilities of biome occurence. This project made predictions for two alternative future greenhouse gas emission scenarios, representing the least (RCP 2.6) and most (RCP 8.5) extreme emission scenarios, respectively corresponding to an increase of global mean annual temperature of 1.2°C and 3.5°C by 2070. Similar to process-based models, the correlative models estimated that under a mild climate change scenario (+1.2°C) (sub)tropical biomes would expand, whereas the extent of tundra and temperate forest would contract.
Further, the current distribution of both temperate forest and grassland is projected to shift northwards. These changes would become amplified under a severe but plausible climate change scenario (+3.5°C), where tundra would lose half of its current extent (Fig. 1 and 2). The results of this study not only indicate considerable imminent long-term alterations in the global distribution of biomes, but also indicate that biomes can be predicted with a limited number of traits.

While all results are contingent on the quality and distribution of data, this thesis improves on the understanding, applicability, and reliability of the role of environmental filtering on terrestrial plant trait distributions at large spatial scales. At the species level, root traits are the most important descriptors of the distribution of tree seedlings along extreme gradients of precipitation, light availability and defoliation risk. When considering trait richness within a community, biotic filtering determines the community structure in addition to environmental filtering, though at different intensities along continental-scale temperature gradients. At the global scale, community mean specific leaf area, height and wood density distributions can be predicted using climatic and soil variables. In turn, these predictions can be used to predict future large-scale vegetation patterns, where tropical biomes are predicted to flourish under climate change and biomes in northern regions will reduce in extent and shift northwards. To determine the reliability of trait predictions and trait-based models, a routine assessment of trait predictions should be performed based on model predictive performance, applicability domain, model uncertainty and realism of predicted trait combinations. In addition, a systematic and careful selection of input data and modelling techniques will improve the interpretability and reliability of trait-based modeling results. This knowledge improves our understanding of how plant trait distributions may be affected by climate change, ultimately allowing for large-scale biodiversisy and ecosystem service assessments with possibly major consequences for life's distribution on Earth.