Large carnivores can exert top–down effects in ecosystems, but the size of these effects are largely unknown. Empirical investigation on the importance of large carnivores for ecosystem structure and functioning presents a number of challenges due to the large spatio‐temporal scale and the complexity of such dynamics.

A mechanistic global ecosystem model was used (the Madingley model by Harfoot et al. 2014) to investigate the influence of large‐carnivore removal from undisturbed ecosystems.

The results show that the removal of top–down control exerted by large carnivores (> 21 kg) can trigger large trophic cascades, leading to an overall increase in large herbivores (Figure 1A) decrease in autotroph biomass (see Figure 1B). 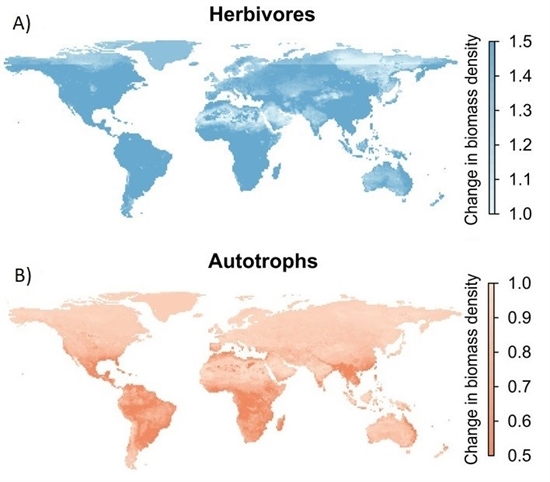 Furthermore, the loss of large carnivores resulted in an increase of mesopredators (not shown here). The magnitude of these changes was strongly related to primary productivity (NPP) (see Figure 2), in line with the ‘exploitation ecosystem hypothesis’. In addition, we found that seasonality in NPP dampened the magnitude of change following the removal of large carnivores.

Figure 2: Global biomass densities of herbivores and autotrophs plotted against net primary productivity (NPP). Orange circles indicate the biomass density of a specific group per spatial grid cell extracted from the large‐carnivore (> 21 kg) removal scenario. Purple circles show data points from the control scenario (a simulation run in which no carnivores were removed).

The results reinforce the idea that large carnivores play a fundamental role in shaping ecosystems, and further declines and extinctions can trigger substantial ecosystem responses. The findings also support previous studies suggesting that natural ecosystem dynamics have been severely modified and are still changing as a result of the widespread decline and extinction of large carnivores.

Developing an R package for the Madingley general ecosystem model

Mechanistic general ecosystem models are used to explore fundamental ecological dynamics and assessing the possible consequences of human impacts on ecosystems. The Madingley model is the first mechanistic General Ecosystem Model (GEM) that simulates a coherent global ecosystem, consisting of both photo-autotrophic and heterotrophic life, based on a set of fundamental ecological processes. The current C++ implementation of the Madingley model delivers fast computational performance, but it limits:

The MadingleyR R package streamlines the installation procedure and supports all major operating systems. MadingleyR enables users to combine multiple consecutive simulation runs, making case study specific modifications to MadingleyR objects along the way. Default input files are available from the package and study-specific inputs can be easily loaded from the R environment. MadingleyR also provides a set of functions to plot and summarise MadingleyR outputs. This work provides a comprehensive description of the MadingleyR functions and workflow. It also demonstrates the applicability of the MadingleyR package using two case studies.

First the cascading effects of the loss of mega-herbivores on food-web structure was simulated. This was done by removing endothermic herbivores with a body mass >100 kg from the simulation. The removal of large herbivores led to the disappearance of large endothermic carnivores, increase in smaller herbivores and consequent increase in meso-carnivores.

In the second case study, the impacts of increased land-use intensity on the total biomass of different feeding guilds was simulated by restricting the total vegetation biomass available for feeding. This was done by reducing the relative biomass of autotrophs (i.e., vegetation) accessible for herbivory and observed how it affected the biomass of endotherms. The linear decrease in vegetation biomass available to herbivores results in a non-linear decrease of the total biomass of the endotherms. In our example location (the Serengeti) the decrease in the proportion of endotherm biomass showed a concave down decreasing trend relative to the fraction of vegetation biomass made inaccessible. This means that the response in cohort biomass was not as strong as we would expect under a linear relationship between vegetation and cohort biomass. As explained by Newbold et al. (2020), systems characterized by low seasonality and high productivity (as simulated here), can show a rapid degradation in ecosystem structure if a certain threshold of inaccessible vegetation biomass is surpassed. However, before reaching this threshold, these ecosystems may appear relatively stable.

The MadingleyR package provides direct accessibility to simulations with the mechanistic ecosystem model Madingley and is flexible in its application without a loss in performance.