Scientific developments: What can our models do?

SIMPLEBOX/TREAT. Decades of developments have yielded many models to estimate the concentration of a compound in water, air and soil [Laane et al. 2011]. If the numbers of substances and regions to be covered are large in comparison to available data, time or resources, one usually resorts to so-called multimedia fate models. In the EU and UN, SIMPLEBOX/TREAT is the preferred fate model for risk assessment of substances and life cycle assessment of products [Schoorl et al., 2015]. SIMPLETBOX calculates concentrations in air, water and soil from emissions while SIMPLETREAT estimates emissions from waste water treatment plants. Many chemical parameters are calculated as a function of molecular properties (Kow etc.) but user-specific input is needed for some chemical as well as for all physical and toxicological quantities, such as degradation rate, temperature and median effect concentrations. Both models were conceived at the National Institute for Public Health and the Environment (RIVM) and later improved at Radboud University (RU).

OMEGA. While many toxicological and ecological models have been developed for specific cases too, few have been applied across geographic regions, chemical substances, biological species and social categories [Hendriks and Van Straalen 2019]. So far, none of these eco(toxico)logical effect tools has been embedded in international frameworks to the same extent as SIMPLEBOX/TREAT for chemical fate. We have therefore built a model that calculates concentrations in organisms along food chains respectively [Figure 1] as well as densities of populations and diversity of communities Figure 2-3] based on concentrations in air, water or soil [Knoben et al. 1998, Hendriks et al. 2001, Hendriks et al. 2005]. 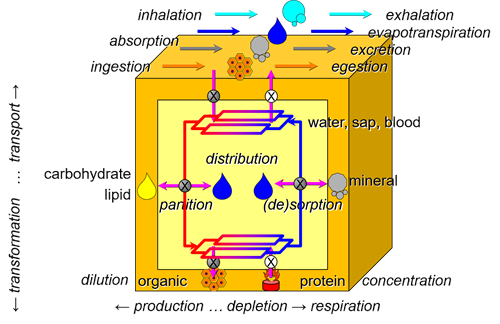 We called the tool OMEGA (Optimal Modelling in Eco(toxico)logical Applications) expressing our aim to cover equilibrium (hence ∞) as well as elementary kinetics and dynamics, simultaneously optimising transparency, accuracy and parameterisability. Depending on the number of organs, individuals, populations and trophic levels distinguished, one can flexibly merge or separate 1-, 2- and multi-compartments. To minimise data collection and generation, default values for input variables and parameters (e.g., temperature, consumption rates) are obtained as a function of geographic (e.g., latitude) and chemical or biological (e.g., molecular and species size) attributes. If deviations between default and actual values become uncertain, one is referred to databases, e.g., on median effect concentrations for specifically acting chemicals. Conceived at a governmental agency that later merged into Deltares, OMEGA originally focused on substances in the strict sense, i.e., chemicals or micropollutants. Since the transfer to RU in 2005, the domain is extended to substances in a broad sense, including molecules, particles and materials such as air (oxygen, carbon dioxide), water, solids, food, tissue and compounds of a natural (lipids, proteins, carbohydrates, vitamins, hormones) and synthetic (chemicals, drugs) origin. This expansion allows us to cross disciplinary boundaries, covering abiotic and human systems, such as rivers and cities. Consequently, OMEGA gradually becomes available for assessing hydrogeological, veterinary, medical and ecological issues. 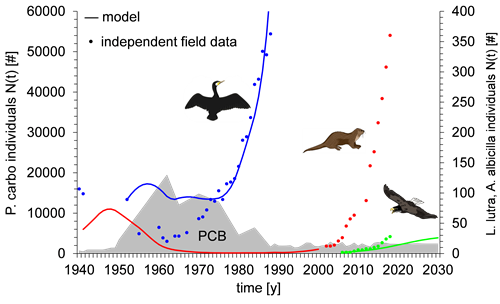 Over the years, OMEGA has been benchmarked with related models [Traas et al. 2004, Stadnicka et al. 2012, Ardestani et al. 2014] and empirically underpinned with thousands of lab and field data for tuning and independent testing, respectively [Table 1].

Table 1. Development and application of OMEGA by ourselves. 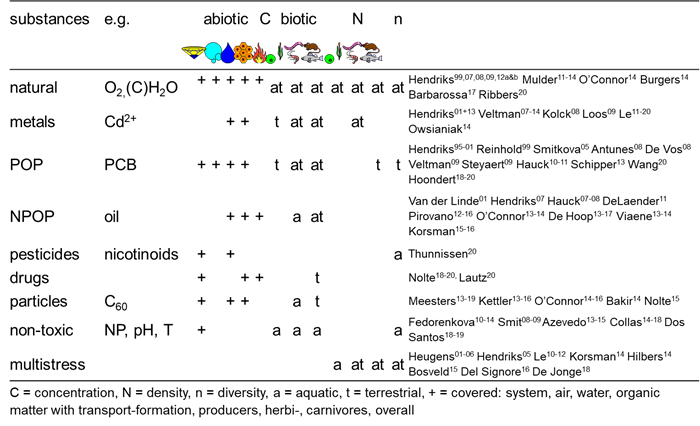