Welcome to the website of the Faculty of Arts. We offer Bachelor's and Master's programmes in the fields of art, culture, history, communication and language. Our research is conducted within the research institutes Centre for Language Studies (CLS) and Radboud Institute for Culture and History (RICH).

No matter what you are looking for, you will find it on our campus. Radboud University is not only a place for study and sports, but also one of rest and relaxation. Our restaurant De Refter houses six different food counters offering a range of cuisine. Watch this video to discover more about our campus!

In 2023 we celebrate our faculty's 100th anniversary! Therefore, we will organise a lot of various activities throughout the entire year for our students and staff. You can click down below on the link for more information.

Graduate School for the Humanities

The Graduate School for the Humanities (GSH) unites the graduate programmes of the Centre for Language Studies (CLS), the Radboud Institute for Culture & History (RICH) and the Research Institute for Philosophy, Theology & Religious Studies (PTRS). This community consists mainly of PhD candidates, but also of Research Master students and postdocs. 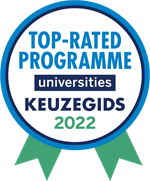 The Keuzegids Universiteiten is published annually and is an independent guide, which critically assesses the quality of both Bachelor's and Master's programmes. This year, Radboud University is the second best general university in the Netherlands according to the Keuzegids Universiteiten. We finished behind first place by just half a point. In addition, six of Radboud University’s Bachelor’s programmes received the ‘Top Rated Programme’ designation due to their high scores. According to the Keuzegids, this means they are some of the very best that Dutch university education has to offer. The Bachelor's programmes that are best in their fields at the Faculty of Arts are Dutch Language and Culture and Roman Languages and Culture Studies (French and Spanish).