On Monday 5 September, seven students will receive a Study Award. Among these students is Larissa Henrique dos Santos Lemos, student of the Faculty of Arts. The Study Award is handed out annually for having written a thesis of exceptional quality in the previous academic year. The prize will be presented during the Opening of the Academic Year. 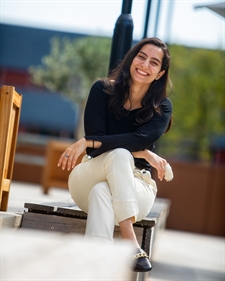 The Emotional Side of Roman Slavery

Prizewinner Larissa wrote her thesis on the emotional side of Roman Slavery. How she came up with this idea? She explains: "One day some questions just pop into my head. How can someone whip a person and be okay with it? What went through the head of Roman slaveholders? How do they justify their position and treatment towards enslaved people? What emotions did they express? Maybe they did not feel anything or felt emotions that we do not recognise today as such?" Consequently, she started studying the history of emotions and came across methods to analyse how emotions affected Roman elite attitudes towards enslaved people. ​

Do you want to know more about the content of Larissa's thesis? Then you can read the abstract and this interview within the 'We Are Radboud' series.

While writing her thesis, dr. Coen van Galen, dr. Anneleen Arnout, and second reader dr. Lien Foubert supervised her along the way. "It was exciting and challenging to interpret emotional language in ancient Roman sources on slavery. Therefore, it was great to bring Coen van Galen (specialist in slavery) and Anneleen Arnout (specialist in the history of emotions) together to supervise me in this project," Larissa says.

Supervisor Van Galen explains: "Seemingly with the greatest of ease, Larissa combines different disciplines in her work. The concepts and notions from other disciplines are applied by Larissa in this research with a refinement and nuance that does justice to the characteristics of Antiquity and at the same time leads to truly new insights into the Roman approach to slavery."