In her historical research into the processing of natural disasters in the Netherlands, Lotte Jensen came across songs about fires, floods, drought and insect scourges. She is now working on a CD in collaboration with the Utrecht music society Camerata Trajectina, in which this tradition of the Dutch disaster song is brought to life. In order to realise this project and make the disaster songs available to everyone, she has started a crowdfunding campaign together with the Radboud Fund.

When people are hit by a disaster, they often seek comfort from each other. Less well known is that there is a long and illustrious tradition of disaster songs: music offered comfort and solidarity in times of crisis, and it still does. After catastrophes that had a major impact on the community, minstrels took to the streets to spread the news.

The oldest song about a Dutch natural disaster is, as far as we currently know, about severe drought in Brabant and dates from 1611. Unfortunately, no copies of this have survived. Over the course of the seventeenth century, more and more disaster songs appeared that covered various events: for example, a plague of mosquitoes was sung about in Friesland in 1664 and the flood of 1682, which flooded large swathes of Zeeland.

A selection has been made from a large number of songs from the 17th to the 20th centuries, to be performed by Camerata Trajectina. The selection paints a rich and varied picture of how people used to deal with disaster. The songs are full of emotional proclamations, comforting words, instructive messages and sensational details to hold the attention of the audience. For instance, take this song from 1861: 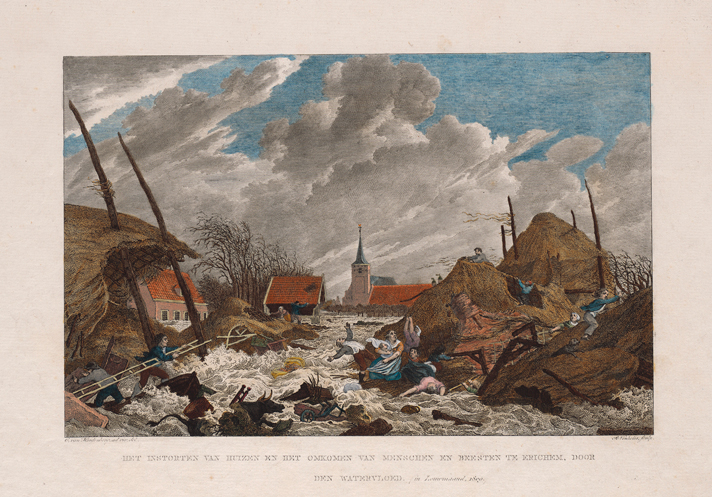 The flood disaster of 1809 is depicted by Reinier Vinkeles.

The songs also tell the history of the Netherlands. This is how the battle against water runs through the Netherlands’ history: from the St Elizabeth's Flood in 1421 to the catastrophic floods of 1953. The flood song gets a lot of attention on the CD.

Help bring the songs to life

To make this project a reality, € 10,000 is needed. Would you like to help? Then donate via this site. Any amount is welcome. Together we can bring the tradition of the Dutch disaster song to life. On the crowdfunding page, you can read more about the history of the disaster song in the Netherlands, about flood songs in particular, and you can go there to find lyrics and background literature.