Memories of the debris of 9/11

After the attacks on 11 September 2001 in New York, nothing was left of the once iconic Twin Towers but a huge pile of debris. But debris, dust and steel acquired value because they mixed with the remains of unidentifiable victims. In his book project, researcher László Munteán explores the complex relationship between materiality and memory after the 9/11 attacks.

Photo by Jesse Mills on Unsplash

Anyone who was old enough to follow the news on 11 September 2011 can probably still remember the images of the panic, the collapse of the towers and the gigantic clouds of dust. 22 years later, the event is still etched in collective memory. Remembrance of the attacks and the victims is kept alive in every possible way: memorial services, museums, monuments, films, books, exhibitions, etc.

What has received less attention are the ruins of the towers. After the attacks, tons of debris in New York had to be dealt with. ‘What happened to the material remains of the World Trade Center (WTC) after they had been removed from ground zero is still a very problematic subject’, says László Munteán, assistant professor of cultural studies and American studies and expert on memory studies in relation to materiality. ‘The material went to museums and memorials, but also to landfills, and it was recycled into new buildings in the Far East. The debris is full of contradictions about the meaning of value and waste.’

The attacks on the WTC left more than 2,600 people dead. The debris of the towers mixed with the remains of hundreds of people. In order to have the space needed to retrieve and identify human remains, the debris was taken to a closed landfill on Staten Island immediately after the attack. The first trucks arrived there shortly after 11 September. Although a large number of human remains were recovered at ground zero, many were also buried into the landfill: a decision that led to ongoing lawsuits filed by family members.

After the disaster, the relatives of unidentified victims received an urn filled with ashes and dust from ground zero. Munteán: 'The fact that the bodies were not available created a void in the culture of commemoration. The urns were intended to symbolically fill that void. But the debris of the towers was not ‘simply’ a collection of bodies and buildings. It included the remains of victims, but also of perpetrators. And among the recyclable architectural debris was also a lot of toxic waste. But in the face of a catastrophe that left many families without bodies to bury, the ritual of the urns was meant to provide a sense of closure.'

According to Munteán, this shows how material can transcend its actual status through the memory we attach to it. The warship USS New York is another example of this. Shortly after 11 September 2001, the governor of New York wrote a letter to the US Navy requesting that the name 'New York' be given to a new warship that would be involved in the Global War on Terrorism, in honour of the victims. Some 7 tons of steel from the ruins of the World Trade Center (a fraction of the ship's total weight) were symbolically used to build the ship. ‘Like the urns, the use of steel from ground zero in the ship gives meaning to loss: the destroyed towers and the victims were not lost, but turned into a weapon of revenge’, explains Munteán. ‘But the steel beams that were melted down and incorporated into the ship were examined very carefully forensically and they did not find any remains of victims. Therefore, the material was in fact nothing more than recyclable steel. Yet in this particular ritual it symbolises the bodies of the victims.' 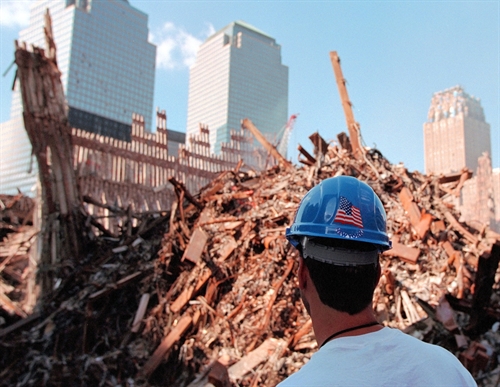 Whereas for the families of the victims it was the human remains that gave value and meaning to the debris, it was the opposite with the scrap metal that was shipped from the Staten Island landfill to China and India to be reused in new buildings. 'The meaning of the cargo came in the context of trade and took on a commercial value,' Munteán explains. 'What had value and what was waste was reversed. That is very interesting and problematic. The material used in the warship was in fact the same material that was shipped to India and China. Yet the warship represents the victims, while the material that was shipped is simply a commodity. This points to the strange ability of ordinary objects to transcend their status as objects and show traces of life.’

László Munteán is currently working on a book about the World Trade Center ruins and the meaning they acquired after they were removed from Ground Zero. Want to know more now? He recently talked about his research in a podcast episode of The Connecting Memories Podcast.