The effect of cast film extrusion processing conditions, such as the chill-roll temperature, temperature of the melt, and line speed, on the structure of different isotactic polypropylene homo- and random copolymers has been investigated by means of Small- and Wide-Angle X-ray Scattering (SAXS and WAXS) and correlated to stiffness and haze. Stiffness and transparency have been found to be strongly dependent on the temperature of the chill-roll. Interestingly, line speed has been found to affect the total crystallinity when the chill-roll temperature is increased, while an overall minor effect of the melt temperature was found for all cast films. The polymer characteristics, defined by the catalyst nature and comonomer content, affect the final material performance, with the single-site catalyzed grades performing better in both mechanics and optics. Haze levels were found to correlate with the mesophase content rather than to α-crystallinity and to be dependent on the domain size for all grades. The remarkably low haze levels reached by the single-site grade with higher isotacticity can arise from high nucleation rate and orientational effects, which ultimately yield smaller and smoother scattering domains. 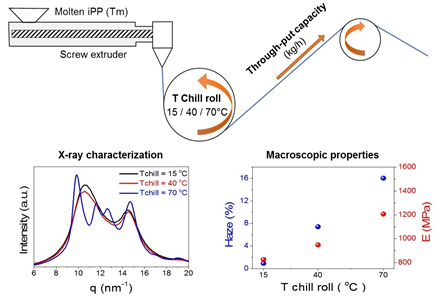