NOTE: this lab is under renovation in 2021 and not available for user experiments. For infrared ion spectroscopy see User station 9: quadrupole ion trap.

This user station harbors a Fourier-Transform Ion Cyclotron Resonance Mass Spectrometer (FTICR-MS) that was originally built in collaboration with Professors Eyler and Marshall from Florida. 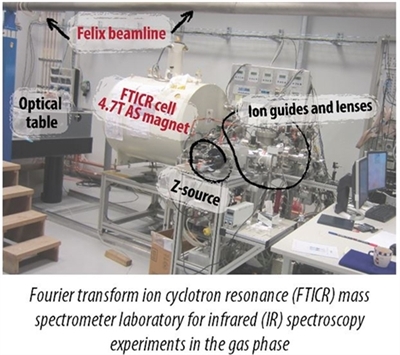 The instrument is based on a 4.7-T superconducting magnet (Cryomagnetics) with a 5” bore. The ICR cell is of the open-ended type to provide optimal optical access to the trapped ions. The instrument is equipped with a modified Waters Z-Spray® electrospray ionization (ESI) source which can be operated in positive and negative ion mode.

ESI solutions are typically made in mixtures of acetonitrile or methanol and water at concentrations of approximately 0.1 – 1.0 mM. Ions are accumulated in a linear hexapole RF trap at approximately 10-3 Torr. After pulsed extraction from this trap, ions are guided to the ICR cell using RF and DC electric fields, including a 1-m long octopole ion guide leading up to the ICR cell.

Capturing the ions in the ICR cell is achieved using gated re-referencing of the ions’ bias potential, thus avoiding the need for a gas pulse and possible collisional heating. During operation, the pressure in the ICR region is in the 10-8 range. The instrument is controlled via PXI interfacing using a modified version of the software developed in the group of Heeren at FOM AMOLF. The software allows for multiple stages of mass-selection (MSn) to be performed in the ICR cell.

In addition to the FELIX beam, a secondary laser beam can be introduced into the ICR cell to interact with the stored ions; a 35-W CO2-laser is standard available.