This instrument is dedicated to experiments where gaseous molecules and ions are subject to intense IR radiation produced by the Free-Electron Laser for IntraCavity Experiments FELICE, thereby enabling e.g. action spectroscopy of even the strongest bound species in a molecular beam environment. The instrument focuses on the geometric and electronic structure of metal clusters which can be used to study bulk phenomena, or their interaction with ligand molecules as a model system for heterogeneous catalysts.

In a typical experiment, transition metal clusters (typically 3 to 50 atoms) are produced in a molecular beam with a home built Smalley-type laser ablation source and can be complexed with ligands in a flow-tube type reaction channel. The clusters then interact with one macropulse of FELICE, and are detected using time-of-flight mass spectrometry. 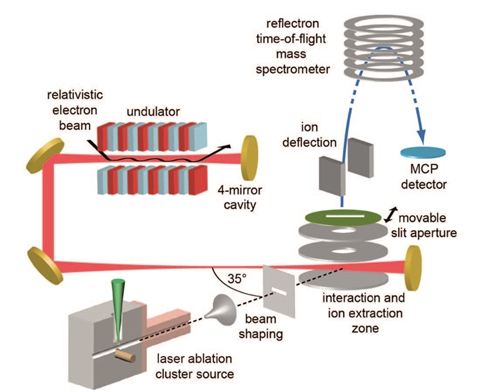