This user station harbours the FELICE-FTICR MS, a Fourier-Transform Ion Cyclotron Resonance Mass Spectrometer inside the optical cavity of the Free Electon Laser for IntraCavity Experiments with laser pulses up to several J. It is dedicated to the spectroscopic characterization of photostable and strongly bound systems, such as astronomical aromatic hydrocarbon ions.

The instrument is based on a 7-T superconducting magnet (Cryomagnetics) with a 5” bore. To vary the IR fluence with which ions interact, this unique instrument has not one, but four ICR cells of which one coincides with the FELICE focus, while the optical beam is progressively larger in the others. The cells are of the open-ended type to provide optimal optical access to the trapped ions. The magnet can be moved and centred on the cell of interest providing a mass resolution m/∆m exceeding 105 for masses up to m/z=1000.

The instrument currently has one source, an Electron Impact (EI) source, while work is in progress to commission two further types, an ElectroSpray Ionization (ESI) source, and a laser vaporization cluster ion source. The EI operates at a wide range of electron energies and can be combined with an oven that heats up to over 500 °C.

Ions from the ion source of choice are guided through a quadrupole mass filter (QMS) and accumulated in a Rectilinear Ion Trap (RLT) in ~ 10-3 mbar argon collision gas. After pulsed extraction from this trap, ions are transmitted to one of the ICR cells, where they are captured using gated re-referencing of the ions’ bias potential. The pressure in the ICR region is in the 10-8 mbar range. Standard FT-ICR isolation techniques (e.g. SWIFT) can be applied to store a single mass prior to IR irradiation. Trapping times can be varied from 100 ms to tens of seconds to provide single shot irradiation at 10 or 5 Hz, multiple shots, and/or (radiative) cooling time. 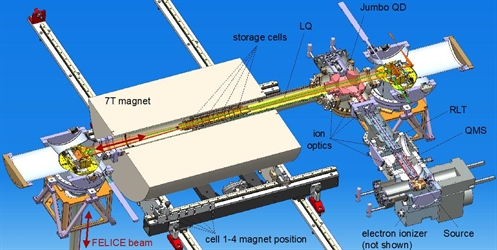 Schematic layout of the FELICE-FTICR MS.