Last month, a brand-new undulator produced its first light, thereby extending the tuning range of FELIX-2 to 3 micron. After a period of design and construction and a 6-week reconstruction period, the technical team has installed the undulator and renewed the laser cavity to increase the stability at short wavelengths.  The extension of the FELIX wavelength range is one of the projects of the HFML-FELIX NWO Roadmap grant 2018.

The free electron lasers at HFML-FELIX provide high-intensity, widely tunable and ultra-short pulse radiation in the infrared and terahertz spectral range. Until now, the suite of four free electron lasers covered a wavelength range from 5 to 1500 μm. Pulse duration and pulse energy vary with wavelength but range typically between 1-50 ps and 5-50 μJ. With the new FELIX-2 undulator, the wavelength range coverage is extended to 3 micron, a significant upgrade which allows to exploit FELIX further by expanding its spectroscopic capabilities.

Director Britta Redlich: “It has been quite a process, from the first design of the new undulator and cavity until the rebuilding and first lasing. A lot of people have contributed to this project. I’m very proud that FELIX-2 is running again and that we can offer our users now also the 3 to 5 micron range. This opens new research possibilities, for example for applications in gas-phase action spectroscopy, such as infrared ion spectroscopy. We are expecting interesting results in that field the coming period.” 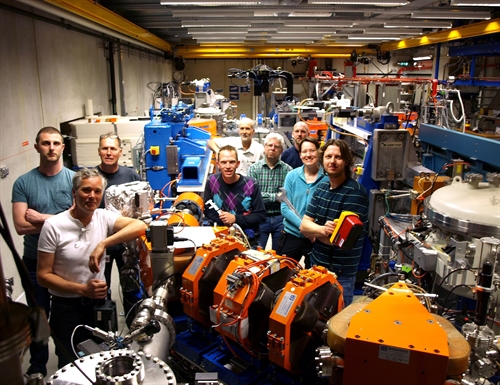 Technician Arjan van Vliet, involved in the project right from the start: “Building the undulator requires extensive knowledge on several fields. The undulator was assembled and characterized in Berlin at the Fritz-Haber Institute, our partner in the Max Planck-Radboud University Centre for Infrared Free-Electron Laser Spectroscopy, and under the supervision of STI-magnetics. It consists of two beams, each with 102 magnets, exerting a force of 1 metric ton on each beam. All 204 magnets are aligned within 20 microns. For the new optical cavity high precision components were required to insure stability and long-life performance. The design of the cavity was made by the FELIX technical team. Many parts for the optical cavity and undulator were produced by the highly skilled machinists at the Radboud Science TechnoCentrum. It was really a team effort.”