IRMPD spectroscopy of photostable PAH ions up to 100 µm

Infrared spectral emission lines observed in the interstellar medium carry information of the chemical inventory of the universe. They are thought to be emitted by a class of highly stable carbonaceous molecules, the polyaromatic hydrocarbons (PAHs), which are frequently excited and ionized by stellar radiation. In laboratory experiments, the IR spectra of possible carriers of the emission are studied to compare them to the observed astronomical emissions. Because these ions all have a very similar binding motif, they have very similar IR spectra, and consequently, no individual PAH ion has been identified as a carrier for the interstellar emissions.

In the far-infrared, spectral differences between different PAHs are predicted to be more shape-specific, and therefore more diagnostic for interstellar identification. However, obtaining the spectral characteristics for strongly bound species in that end of the IR spectrum has proven difficult. The reason for this is that the most widely used technique to record spectra of gaseous ions, infrared multiple photon dissociation (IRMPD) spectroscopy, relies on the resonant absorption of multiple photons resulting in the dissociation of the ion, which can sensitively be detected using mass-spectrometry. Because the energy per photon absorbed decreases with wavelength, an ever-increasing number of photons needs to be absorbed. Simultaneously, the absorption strengths for infrared bands also decreases with longer wavelengths. Combined, these effects heavily stack the deck against the experimental recording of IR spectra towards longer wavelengths. 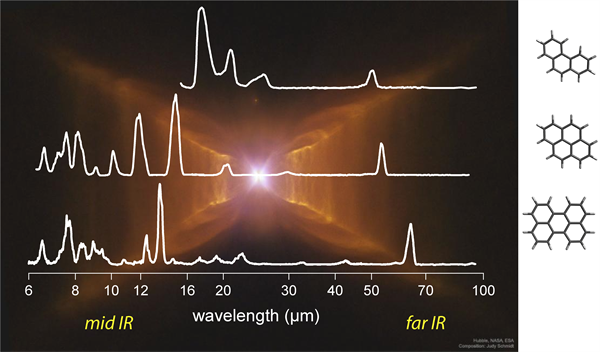 Researchers from HFML-FELIX and the University of Amsterdam have now extended the boundaries of what is experimentally feasible by recording IR spectra of several PAH cations over the unprecedented range of 6-100 µm. For this, they used the intracavity free-electron laser FELICE at Radboud University in Nijmegen, where the (far)infrared and THz light intensities are such that bands with very low absorption strengths at long wavelengths can still be excited sufficiently efficient that dissociation occurs. These observations promise the extension of the spectral range used for spectral identification of molecules in space to at least 100 µm. This wavelength range nicely matches the observational range proposed by the Origins Space Telescope, currently being designed by NASA.