All-optical manipulation and switching of magnetization

Modern hard-disk-drive (HDD) technology encodes information within the local orientation of magnetic bits i.e. a magnetic bit pointing up or down, corresponds to a binary value of 1 or 0 respectively.  Currently, information is written (i.e. bits are reversed) using a local magnetic field delivered by write heads. Since the invention of HDDs in the 1960s, the capacity and writing speeds of HDDs has increased towards densities of terabytes per square inch and speeds on the order of nanoseconds.[1]

However, this progress is now approaching a bottleneck -  processing rates, for example, have been stuck at frequencies of several GHz for almost a decade.  HDDs also consume 10-100 nJ while writing a single bit, and this has played a big role in the fact that information and communication technologies now account for 7% of the global electrical energy production.

To potentially overcome these bottlenecks, we are studying how magnetic bits can be manipulated, or even switched, using ultrashort optical pulses (with a duration on the order of femtoseconds).  In 2007, Stanciu et al discovered that circularly-polarized ultrashort optical pulses could reverse magnetization in a ferrimagnetic amorphous alloy of gadolinium-iron-cobalt (see Fig. 1(a)).
Since then, all-optical switching effects have been discovered in a wide range of materials and systems, with a rich variety and complexity of underpinning physics.  In gadolinium-iron-cobalt, for example, a single ultrashort pulse can reverse magnetization, due to the transient (energetically-unfavourable) ferromagnetic state produced by the pulse.[2]Alternatively, the magnetization of Co / Pt stacks can be switched using multiple circularly-polarized picosecond-long pulses (Fig. 1(b)) – the origin of this effect is still hotly debated. In yet another distinct system, single linearly-polarized optical pulses can reverse magnetization in doped iron-garnets, via the modification of the anisotropy (Fig. 1(c)).  The latter effect is particularly interesting for technological application, since the switching of a nanoscale bit required just 22 aJ of energy, and was achieved within a record-breaking time of 20 ps. 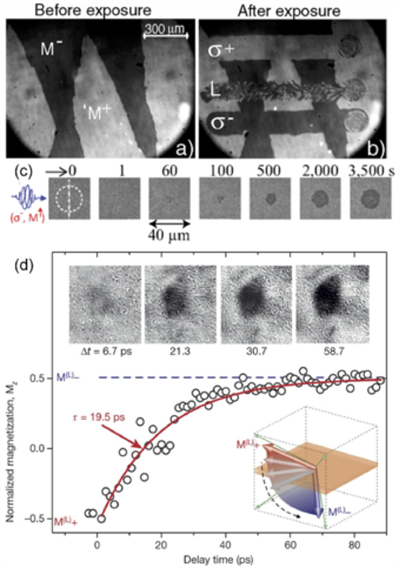 At FELIX Laboratory, we are able to study the underlying fundamental processes of all-optical switching with an unprecedented level of control of the optical pulse. Using the broad range of wavelengths in the mid- and far-infrared spectral ranges, for example, we are able to target and excite at resonance well-defined phonon modes, which can affect the process of all-optical toggle-switching.  On the other hand, the broad range of pulse durations that can be accessed allow us to study the relevant timescales of magnetization reversal processes.