Pioneering research on the light-matter interaction in the mid-infrared

Originating in the time-reversal symmetry breaking, magnetic properties of media can be conveniently probed by the non-invasive optical methods. In particular, a number of magneto-optical effects (Kerr, Faraday etc.) have proven their effectiveness in the characterization of various magnetic materials.

Magneto-optical signals manifesting, for example, in the variations of the polarization state of the probing light, are routinely used for inferring the magnetic state of the probed medium. This method turns out to be particularly useful in the time-resolved experiments with ultrashort laser pulses, where magneto-optical signals provide valuable information about the magnetization dynamics induced by various stimuli. 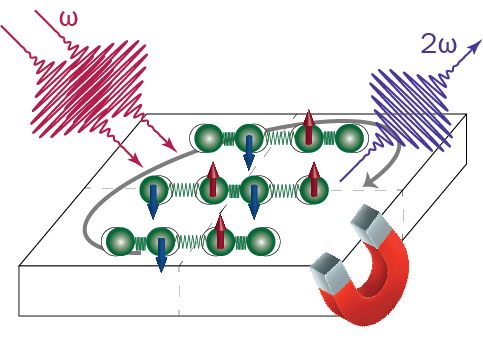 A special place in magneto-optics is reserved for its nonlinear-optical part. Opening up additional experimental degrees of freedom, nonlinear-optical methods are capable of delivering information about the crystalline symmetry of the media. Nonlinear nature of the response ensures improved sensitivity to the resonances which are often characterized by enhancement of the electric field inside the material.

The simplest and the lowest-order nonlinear-optical effect, dipolar second harmonic generation (SHG), is forbidden in the media with inversion symmetry, thus enabling its sensitivity to surfaces and interfaces. The latter represents a unique property of SHG which emphasizes its handiness in studying interfacial effects where conventional linear methods fail due to the dominating bulk contributions.

This means SHG represents a powerful technique for probing interface magnetization in the mid-infrared spectral range (wavelengths on the order of 5-100 microns). There, elementary excitations of the crystalline lattice (phonons) in many solids can be resonantly excited, strongly improving the sensitivity of nonlinear-optical methods.

Nonlinear spectroscopy of magnetic materials is thus capable of visualizing the coupling between magnetic and lattice degrees of freedom. Fundamental understanding of the magnetization-induced nonlinear-optical response in the mid-infrared is required for the designing of magneto-photonic nanostructures with desired properties, as well as for the analysis of relevant physical processes in the time-resolved experiments.
On top of that, nonlinear spectroscopy is a highly appropriate method for studying and characterizing interfacial effects in multilayers and superlattices, where novel exciting physics emerges at the interfaces between different materials.

Taking advantage of our versatile experimental setup, nonlinear-optical, time-resolved and spectroscopic measurements can be combined in a mix-and-match fashion, thus creating novel opportunities for pioneering research on the light-matter interaction in the mid-infrared.