Nieuwkerk, C. van (2019). "Manhood is not easy": Egyptian Masculinities through the Life of Musician Sayyid Henkish 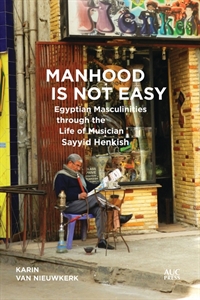 In this in-depth ethnography, Karin van Nieuwkerk takes the autobiographical narrative of Sayyid Henkish, a musician from a long family tradition of wedding performers in Cairo, as a lens through which to explore changing notions of masculinity in an Egyptian community over the course of a single lifetime.
Central to Henkish's story is his own conception of manhood, which is closely tied to the notion of ibn al-balad, the 'authentically Egyptian' lower-middle class male, with all its associated values of nobility, integrity, and toughness. How to embody these communal ideals while providing for his family in the face of economic hardship and the perceived moral ambiguities associated with his work in the entertainment trade are key themes in his narrative.

Van Nieuwkerk situates his account within a growing body of literature on gender that sees masculinity as a lived experience that is constructed and embodied in specific social and historical contexts. In doing so, she shows that the challenges faced by Henkish are not limited to the world of entertainment and that his story offers profound insights into socioeconomic and political changes taking place in Egypt at large and the ways in which these transformations impact and unsettle received notions of masculinity.