Haute, P.I.M.M. van & Westerink, H. (2020). Reading Freud's Three Essays on the Theory of Sexuality. From Pleasure to Object (The History of Psychoanalysis)

Sigmund Freud’s 1905 Three Essays on the Theory of Sexuality is a founding text of psychoanalysis and yet it remains to a large extent an "unknown" text. In this book Freud’s 1905 theory of sexuality is reconstructed in its historical context, its systematic outline, and its actual relevance. 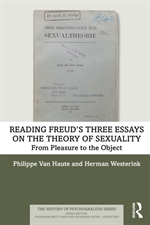 This reconstruction reveals a non-oedipal theory of sexuality defined in terms of autoerotic, non-objectal, physical-pleasurable activities originating from the "drive" and the excitability of erogenous zones. This book, consequently, not only calls for a reconsideration of the development of Freudian thinking and of the status of the Oedipus complex in psychoanalysis but also has a strong potential for supporting contemporary non-heteronormative theories of sexuality. It is as such that the 1905 edition of Three Essays becomes a highly relevant document in contemporary philosophical discussions of sexuality.

This book also explores the inconsistencies and problems in the original theory of sexuality, notably the unresolved question of the transition from autoerotic infantile sexuality to objectal adult sexuality, as well as the theoretical and methodological shifts present in later editions of Three Essays. It will be of great interest to psychoanalysts and those with an academic interest in the history of psychoanalysis and sexuality.