On Thursday, November 21st 2013, the Halkes Women Faculty Network organized her second round table lunch meeting, in the foyer of the Gymnasion. Participants at four different tables discussed the topics of visibility, work-life balance, and the glass ceiling in science. People from different stages in their career (PhD candidates to full professors) came together and exchanged experiences, tips, tricks, and pitfalls.

Our table focused on visibility and our starting point turned out to be that visibility is important. For example, it may help us to get a job, to get our work across to a broad public, and to get our department/institute known. However, reaching these aims through visibility also has some drawbacks. Media attention, for example, may distract us from the content of our work, necessitate us to try and create an image of ourselves, our work and our institutions that does not contain the nuances of what we would want to get across, and/or require some of us to be more extravert than we feel we are. We discussed strategies to try and live with these consequences to the extent that we thought them inevitable. Some strategies mentioned were: balancing the time and energy spent on content and image, conceiving of visibility activities as a kind of play rather than taking them deadly seriously (we will not have any say in the headlines on our newspaper interview, anyway), realize that audience who are really interested will approach us for further contact and information, and be truly amazed about the results that we achieve.

·When you (force yourself to) ask a question during a panel at a conference: briefly introduce yourself with your name, university, and general area of interest before you ask your question or make your comment;

·When you don’t get to talk to someone after a session because this person is overtaken by a crowd: email them afterward to introduce yourself and ask your question. Don’t hesitate to remind them if they don’t reply the first time;

·When adding someone on LinkedIn that does not necessarily know you, but you feel it’s important to connect to them: write them a personal note (not the standard LinkedIn message) explaining why you think you should establish a connection and why their research etc. is of interest to you;

·Try to go to two conferences each year: one small one about your specific topic to actually meet and interact with new people, one big and more prestigious one to put on your CV;

·Talking to more senior scholars at conferences is important, but also cherish your contact with peers in your own position. These are the people who will be the most likely to invite you to collaborate with them (and do you favors) down the line, because they will be in the same career stage as you.

The challenges of reaching a healthy work-life balance were addressed at this table. Many important issues have been raised: finding a balance between work and family or between lecturing and research, or specifying the ways to fit in a romantic relationship within the busy academic schedule; another important point was put forward about how to change some bad habits (eg. being dragged into your work-related activities all the time) and letting go of your thoughts about your work while not at the office. Further important point was whether one should be expected to work more than one is paid for. Academic women with children, who would like to keep on doing their job well, while being a good parent, addressed the question of how to deal with the constant feeling of guilt: feeling guilty about your children while spending time on work, and feeling guilty about your career while spending quality time with your children. All these issues are pointed out as a strong source of stress for most of women at our table, most of whom are in need for good ways of combining the things in their life which they enjoy doing the most: academic career, spending time with the loved ones, having time for themselves. Although we did not reach any specific conclusion about what would be the best way to reach a healthy work-life balance, we did recognise that we might try and work on both ourselves and our environment: it would perhaps be our own task to take care we work on our own feelings and attitudes towards the harsh conditions we as women are encountering within academia (eg. letting go of the guilt feeling) , while trying to contribute to raising awareness of those who set rules for us within the academia about these specific issues (eg. explicitly saying that the increasing peer pressure might not be healthy, and that research institutes and universities should not facilitate the rapidly increasing highly competitive harsh culture at the universities).

We discussed the Glass Ceiling from different perspectives: what are facts and figures? What are personal experiences of women at our table? Do we want special treatment as women (i.e. programs that force selecting women at higer positions)? What can governments do? What can companies do? But also what can you do yourself when it comes to building a career in academia?

Main conclusion was that there is a big difference between men and women in possibilities to build a career, but also in the way women and men are reacting on those possibilities. Women are more modest about their abilities, they are less visible (for instance asking questions in meetings or at congresses) and they are not used to express their needs and wishes. Also we discussed different belief-systems in our culture about women and career. Most striking was that one of participants even never considered a possibility of wanting to become a professor, just because she had a belief that combining family life with such job was not an option. She based her belief on what she actually saw around her: most professors are male and they are not spending much time at home. We talked about importance of having female role models in those positions who have family lives and / or who are considered as being nice person. This latter appeared to be something important for women at our table. As we found out, most women at high positions are not considered to be very nice.

We concluded our discussion with things that government can and should do (we mentioned some countries like Scandinavian countries where there are more women on top); things that companies can do (programs that force certain percentage female professors for instance); and most importantly, we concluded that there are also things you can do yourself (increasing your visibility; being clear about your ambitions; looking for ways to combine family and work life: visiting congresses that are planned in vacation period for instance). 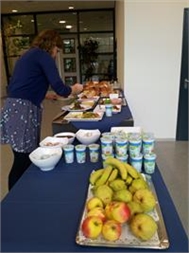