The index Curacao: Slave Registers and Emancipation Registers 1839-1863 has been made available under license conditions agreed upon in the cooperation agreement between the National Archives of Curacao, the Radboud University/Foundation HDS and the University of Curacao through the CC BY-SA 3.0 license. In essence, this means that the index is freely available to users, provided that in references and any republication the name is always mentioned and the index is not commercially exploited by the user.

The slave register of Curacao

The Curacao slave register is a registration kept by the colonial government of people who lived in slavery on the island of Curacao between 1839 and the abolition of slavery in 1863. This register was introduced in Curacao in early 1839. All slave owners were required to register the name, gender, year of birth and name of the mother of the people in their ownership. Furthermore, all changes had to be registered: birth, death, sale, release and the import and export of people in Curacao. This way, a closed registration of people was created: as long as someone was alive and in slavery on the island, this person could be traced in the slave registers.

In total, the slave registers of Curacao consist of eight books, containing 1,070 folios (sheets). The register is complete. The number of books and folio’s is considerably less than in Suriname, where there are still 43 books of slave registers, containing almost 15,000 folios. This does not only reflects a lower number of enslaved in Curacao, but also a different way of registration. Unlike in Suriname, the slave registers were not periodically renewed and the same books stayed in use for more than 25 years. Furthermore, in Surinam each folio was reserved for one owner, while the rest of the page stayed empty. In Curacao, free space was reused and folios in the slave registers of Curacao often contain multiple owners.

The advantage of the later introduction of the Curacao slave register is that from the start in 1839 information is included in the registers that was lacking in the Surinamese slave registers until 1848. For example, in principle the year of birth and the name of the mother are mentioned for everyone. Also, when someone is bought or sold, there is usually a reference to the folio where this person was transferred to. This makes it relatively easy to find families in the female line in the Curacao slave registers. In total, there are 21,500 entries in the slave registers. Because people who were sold occur several times in this register, the registration covers about 13,000 individual people who lived in slavery in Curacao between 1839 and 1863.

In the slave registers you will find an enslaved person's name, gender, year of birth, mother's name, the owner and a link to the scan of the folio. In addition, you will find the date a ‘mutation’ was recorded, the type of mutation (birth, death, registration and deregistration, through birth, death, sale or manumission) and sometimes additional information. If only the year 1839 is recorded as mutation, it means that the person was registered from the start of the slave register in 1839. People who according to the slave registers were still alive at the time of emancipation have as their deregistration date July 1, 1863.

Emancipation took place in Curacao on July 1, 1863. On that occasion, all people who were released received a surname. They did not have one before 1863, because people in slavery were not allowed to have a surname. In some cases the first name was also changed in 1863, but unlike in Suriname, the latter did not happen on a large scale in Curacao. In order to have an overview of the new names, emancipation registers were created in Curacao, formally called ‘Registers der vrijgelatenen’ (‘Registers of the freed’).

Although the purpose of both registers was the same, the structure of the two emancipation registers is somewhat different. The register for the city district consists of a single volume, listing in order of declaration by a clerk the surname, first name, and year of birth of each emancipated person, with the name of the former slave owner in pencil behind that under remarks. The register for the third district is a compilation of the declarations made by the former slave owners in that district. These were sent a form in May 1863 on which the owners were to list the people in their possession and the surnames these people would bear after emancipation.

The emancipation registers contain a surname, first name, mother's name and the age or year of birth of the people who were released in 1863 and the name of the former owner. In a few cases, there is also additional information, such as about name changes after 1863. 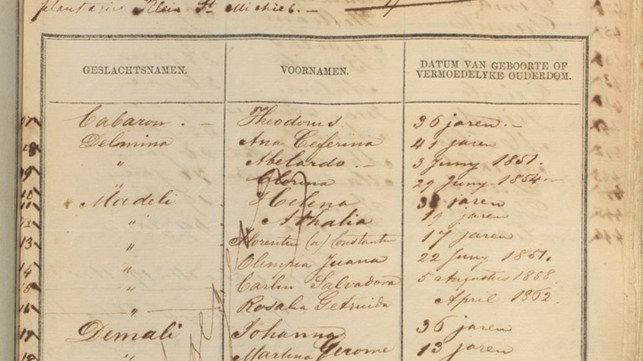 In some cases, there have been additions to the database from two other sources: the manumission index and from the ‘Borderellen’.

Manumissions concern the releases of people from slavery before July 1, 1863. The Curacao slave register only mentions that someone was manumitted, but not which surname this person received upon release. Because this information is important, in those cases we have included the name and a reference to the index ‘Free from Slavery’.

‘Borderellen’ are declarations of slave owners from 1862 with lists of the people in their possession. For owning the people on this list, they claimed compensation from the government upon the abolition of slavery. Because the governement paid 200 guilders per enslaved person, these lists were carefully checked by special committees. In some cases it turned out that people on the list had died or fled or had been sold at the last minute. If that information is no longer included in the slave register itself, it has been added as a remark to the database. Source: Archief van de Algemene Rekenkamer, 1814-1953: Comptabel Beheer (2.02.09.08), inventory numbers 238-245 (National Archives, The Hague).

For an explanation of the fields in the database, please click here.