What are the Surinam slave registers?

The slave register in the former Dutch colony of Suriname was established by Royal Decree in 1826. This was done to combat the illegal trade in enslaved people. The international trans-Atlantic slave trade from Africa to the Dutch colonies in the Americas was banned from 1818 onwards, but the smuggling of people into Surinam continued. A compulsory registration of all enslaved persons by name and age, including mutations like birth, death and change of ownership, was intended to make it impossible to import groups of enslaved people illegally (according to the laws in force at the time) and thus put an end to the illegal trans-Atlantic slave trade.

According to the decree of 1826, slave owners had to report the people in their possession to a civil servant in Paramaribo (the capital of the colony) or Nieuw Rotterdam (for the inhabitants of the western areas of Nickerie and Coronie). After that, every ‘mutation’ had to be reported to this civil servant, such as births, deaths, purchases and sales. By registering people and their transfers, a closed registration was created that made it almost impossible to smuggle groups of people illegally into Surinam and include them in the slave registers.

The registration in the slave registers was maintained until the abolition of slavery in Surinam on 1 July 1863. Once every few years, civil servants started a new series of registers into which the information that was still relevant was copied. As a result, there were a total of five series of slave registers:

The Surinamese slave registers in this index include 43 books with a total of almost 15,000 folios. 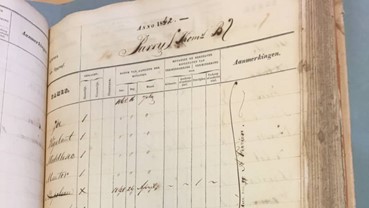 The slave registers are classified by legal slave ownership. Each series of slave registers is divided into books for plantations and for private owners, because enslaved workers owned by plantations had a slightly different legal status than enslaved people owned by private slave owners. People owned by plantations could not be sold independently from the plantation. In the case of plantations, only the name of the plantation and the division (the administrative unit to which this plantation belonged) are mentioned. In the case of private owners, the name of the owner or owners is given. A folio (double page) is always linked to one owner (or joint owners) or a plantation. However, several folios could be linked to a single owner or plantation if there were more enslaved people than could be recorded on one folio.

In the early slave registers, the information for each enslaved person is very limited. Beside the name of the owner, only the name of the enslaved, the gender and sometimes the age were registered. By new-born children the name of the mother was also mentioned. The dates mentioned in the slave registers are the ‘mutation dates’, the date of registration of each event, not the actual date of the event. Because some plantations only registered new-borns and deaths only twice a year, there could be months between an event and its registration.

Over the years, the information recorded in the slave registers increased. From 1850 onwards, the actual dates of births and deaths had to be registered. Starting in 1848 the slave registers also mention the name of the mother of each person, which makes reconstructions of female family lineage possible. This is also possible, because in Suriname it was forbidden to sell children independent from their mothers, unless the government gave special permission to do so. In the 1830-1863 period, this meant that families had to be kept together as long as the mother was still alive, even if her children were adults and had children of their own.

Fathers were never registered and neither were other family connections or cohabitation. Families were not normally registered together as a group. In most cases, first the men were registered ranked by age, then the women ranked by age and then people who were later added to the register throughout the registration period.

There are some limits, however. Except for the parts of the registers which have been lost, there are some people who were not registered because they were not deemed relevant for the combat of the illegal international slave trade. These were people who were directly owned by the colonial government, so-called ‘landsslaven’, because it was assumed that the government itself would never be involved in the trafficking of enslaved people. It was only in the last series from 1851 onwards that these ‘landsslaven’ were included in the folios of the ‘Genie Department’ (for enslaved persons owned by the military forces) and ‘‘s land grond Boniface’ (for enslaved persons owned by civil services). People who worked on plantations which had been acquired by the government, such as Catharina Sophia, are included in the older series of slave registers.

Another group which is missing are people who were declared ‘infected’. This meant that they had been diagnosed with leprosy or elephantiasis. They were sent to the Batavia leprosy colony at the Saramacca river and deregistered from the slave registers.

What information can be found in the index?

In the Surinamese slave registers, enslaved people were registered on the page, the ‘folio’, of their owner. This could be a plantation or a private slave owner. The slave registers start in 1830 and continue until the abolition of slavery in Surinam on 1 July 1863.

In the slave registers you can find the ‘slave name’ of a person, gender, age or year of birth, mother’s name (mainly in registers from 1848 onwards), the owner and a link to the scan of the folio. In addition, you can find the date on which a ‘mutation’ was recorded, the type of mutation (for example birth, death, sale or manumission) and sometimes additional information.

If someone was born, died, was sold or manumitted, this was noted as a mutation. The mutation date is the registration date and not the date of the event. In particular, births and deaths were often not registered until weeks or months later. If there is only a year 1830, 1838, 1848 or 1851 listed as the mutation date, this means that the person was transferred to the new folio of the same owner when the slave registers were renewed. There are four series of registers available: 1830-1838, 1838-1848, 1848-1851 and 1851-1863. People who, according to the slave registers, were still alive at the time of emancipation have listed as the deregistration date of 1 July 1863.

More information on the slave registers of Surinam can be found in the open-access publication:

For translation and explanation of the different field names in the index, click here.