Seeing is believing: a little frog (alive !) and a water ball levitate inside a Ø32mm vertical bore of a Bitter solenoid in a magnetic field of about 16 Tesla.

These photographs of water and a frog hovering inside a magnet (not on board a spacecraft) are the first observations of magnetic levitation of living organisms in a room-temperature environment. They are somewhat counter-intuitive. How can they levitate?

Lesson #1: Everything can levitate

It is possible to levitate magnetically every material and every living creature on earth. Molecular magnetism is always present, although it is very weak and usually remains unnoticed. It might give you the impression that materials around us are mainly nonmagnetic. But this is not true. They are all magnetic. We call them ‘diamagnetic’. With magnetic fields high enough you can levitate all diamagnetic materials. At our lab, we develop and build magnets that have a very high magnetic fields. We use it to investigate molecules and materials. And show the world a levitating frog.

How does the frog fly?

To explain, we have to start at the beginning. All matter in the universe consists of small particles called atoms. Each atom contains electrons that circle around the core called nucleus. If you place an atom in a magnetic field (or a large piece of a matter containing billions and billions of atoms), electrons doing their circles inside don’t like this very much. They change their motion in the opposite direction of the external influence. They create their own magnetic field. The atoms behave as little magnetic needles pointing in the direction opposite to the magnetic field. There are a few materials (such as iron) whose atoms are a bit crazy and love to be in a magnetic field. Their magnetic “needles” are oriented in the same direction. But those are exceptions to the general rule.

Magnets push each other away if you try to bring together their like poles, the two north or two south poles. Similarly, the north pole of the external field will try to push away the “north poles” of magnetized atoms. Our magnets create a very large magnetic field (about 100 to 1000 times larger than a household magnets). In this field, all the atoms inside the frog act as very small magnets, creating a small field. You may say that the frog is now built up of these tiny magnets all of which are repelled by the large magnet. The force, called the diamagnetic force, which is directed upwards, appears to be strong enough to compensate the force of gravity (directed downwards) that also acts on every single atom of the frog. So, the frog’s atoms do not feel any force at all and the frog floats as if it were in a spacecraft. The small frog looked comfortable inside the magnet and, afterwards, happily joined its fellow frogs in a biology department. Wat a more solid explanation? The one with formulas can be found below.

Why did you use a frog?

However common in biology research, frogs are rare customers in physics laboratories and you may wonder why we levitated frogs rather than "something scientific". We apologize to those who believe that "the real physics" should involve only obscure substances and be always dull.The levitation of diamagnetic material was first demonstrated in 1939 when small beads of graphite and bismuth were levitated in an electromagnet (for historic details, read Physics Today).It took scientists another 50 years to rediscover levitation when physicists from Grenoble lifted several organic materials by the diamagnetic force.

When we, in our turn, rediscovered levitation (being unaware of the previous experiments) with levitating water, we were amazed to find out that 90% of our colleagues did not believe that water can levitate. We wanted to make people aware of this phenomenon. We levitated a live frog and other not-very-scientific objects such as various plants, frogs, fish and a mouse, because of their obvious appeal to a broader audience and in the hope that researchers from various disciplines, not only physicists, would never ever forget this often neglected force and the opportunities it offers.

What else can you do with diamagnetism?

Diamagnetic levitation differs from any other known way of levitating or floating things. The gravitational force is compensated on the level of individual atoms and molecules. This is, in fact, as close as we can - probably ever - approach the science-fiction antigravity machine. Therefore, it is not always necessary to organize a space mission to study the effects of microgravity– some experiments can be performed inside a magnet instead. Like growing crystals or body tissue without a scaffold.

Will or will not levitate: the explanation for geeks

Whether an object will or will not levitate in a magnetic field B is defined by the balance between the magnetic force F = M∇B and gravity mg = ρV g where ρ is the material density, V is the volume and g = 9.8m/s2. The magnetic moment M = (χ/ µ0)VB so that F = (χ/µ0)BV∇B = (χ/2µ0)V∇B2. Therefore, the vertical field gradient ∇B2 required for levitation has to be larger than 2µ0ρg/χ. Molecular susceptibilities χ are typically 10-5 for diamagnetics and 10-3 for paramagnetic materials and, since ρ is most often a few g/cm3, their magnetic levitation requires field gradients ~1000 and 10 T2/m, respectively. Taking l = 10cm as a typical size of high-field magnets and ∇B2 ~ B2/l as an estimate, we find that fields of the order of 1 and 10T are sufficient to cause levitation of para- and diamagnetics. This result should not come as a surprise because, as we know, magnetic fields of less than 0.1T can levitate a superconductor (χ= -1) and, from the formulas above, the magnetic force increases as B2.

This original work carried out by Nijmegen's researchers was first featured in Physics World, April 1997, p. 28.  The most complete account is given in:

Movies and some more pictures of levitating objects: 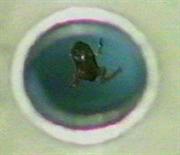 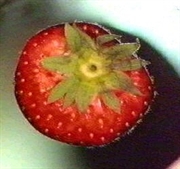 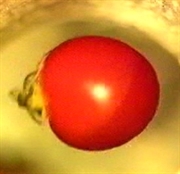