A team of researchers from HFML-FELIX, Aarhus University and the University of Bristol have investigated the versatile semimetal WTe2 by measuring quantum oscillations in charge transport and revealed peculiar electron trajectories that depend sensitively on the electron scattering in the material. The results are published as a Letter in Physical Review Research.

According to quantum mechanics, electrons in high magnetic fields rotate uniformly with a particular frequency. This frequency allows one to determine the so-called Fermi surface of a material. The shape and topology of the Fermi surface, which is unique for each material, fully determine its electronic properties. Hence, knowledge of this Fermi surface gives researchers unprecedented insight into the nature of a metal. The Fermi surface itself can be determined by applying a large magnetic field. Magnetic fields cause electrons to deviate slightly from their original trajectory and with increasing field strength, these deviations become bigger. At large enough fields, the electrons are able to trace out orbits around sections of the Fermi surface, which in turn leads to an oscillatory signal in certain physical properties such as resistance and magnetization. The observed frequency of these ‘quantum’ oscillations is directly proportional to the area of that particular section (pocket) of the Fermi surface. Key properties of the electronic states, such as their effective mass and charge, depend on the curvature of the energy band to which they belong. In semimetals such as WTe2, these states that can either be electron-like or hole-like, with a hole being the positively charged counterpart created in the absence of an electron.

WTe2 is a material that shows extraordinary properties. Bound by weak, Van der Waals interaction, two-dimensional layers can be exfoliated down to a monolayer, leading to emergent phenomena such as superconductivity and the quantum spin Hall effect. In its bulk form (as studied here), its resistance increases by more than 10,000,000% in the presence of a large magnetic field. Moreover, Bulk WTe2 has also been identified as a type-II Weyl semimetal, which essentially means that its electronic bands form tilted Dirac cones that give rise to small electron and hole pockets containing highly mobile carriers.

What is now so special about the Fermi surface of WTe2?
“Imagine a nesting doll,” says PhD student Jasper Linnartz. “The electron and hole pockets in WTe2 fit inside one another in precisely the same way." Since the gap between those pockets is so small, electrons can tunnel between both pockets; a phenomenon we call magnetic breakdown.
By measuring quantum oscillations at different tilt angles and temperatures, the researchers were able to determine the Fermi surface of WTe2 in great detail. Its overall shape, however, was found to make electronic band structure calculations only if the repulsive interaction between electrons was included in the calculations. Notably, this repulsive interaction can also help explain the unusual electronic properties of this material. “What is now so peculiar is the fact that the onset of magnetic breakdown is solely determined by impurity scattering in contrast to magnetic breakdown scenarios in other metallic systems which depends on the strength of the applied magnetic field,” Steffen Wiedmann adds. It is the free-flowing movement of electrons in high magnetic fields that allowed researchers to observe this peculiar type of magnetic breakdown in a solid state material. 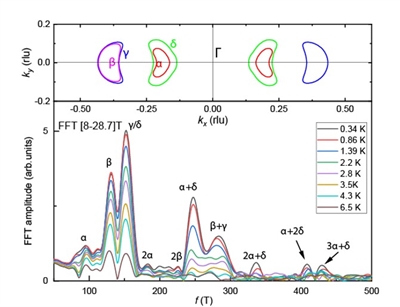 Figure: Fast Fourier Transform spectrum of the quantum oscillations showing the different individual and magnetic breakdown orbits. The orbits are labelled in the cut of the Fermi surface highlighting the nesting doll configuration.