Researchers from HMFL-FELIX and the University of Illinois have joined together to review experimental and theoretical progress toward understanding the nature of strange metals, a phase of matter with unconventional transport properties that is manifest in various exotic materials such as the cuprate high-temperature superconductors. The article has just appeared in print in the journal Science.

Normal metals are materials whose electrical resistivity increases linearly with temperature, a useful property that is often exploited in thermometry. This linearity – caused by electrons scattering off the quantized vibrations of the ions that make up their crystalline lattice – is only fleeting and importantly, vanishes at both low and high temperatures. At low temperatures, these vibrations freeze out and as a result, the resistivity eventually levels off. Upon warming, the resistivity eventually reaches a saturation value as the mean distance travelled by the electrons between successive scattering events approaches the inter-atomic distance.

Over the past few decades, a new class of metals has emerged that violate both principles. In these so-called strange metals, the change in slope of the resistivity as the mean-free-path drops below the lattice constant, or as T → 0, can be imperceptible, suggesting an entirely novel form of T-linear resistivity, one that has defied coherent explanation and become recognized as one of the major challenges in condensed matter physics today.

At the same time, strange metals also exhibit a convention-defying linearity in another transport property namely the magnetoresistance, in marked contrast to the quadratic behaviour seen in normal metals. What's more, its slope is independent of temperature. This constancy suggests that magnetoresistance in strange metals, like their resistance in the absence of field, has nothing to do with the scattering we see in normal metals.

This review catalogues the various magnetotransport properties of candidate strange metals and presents a survey of the current theoretical landscape. Clearly, conventional theory does not apply here. Indeed, the review argues for a radically new approach to our understanding of metallic behaviour, one that draws on a remarkable, recently recognized duality between conformal field theories of strongly interacting electrons and weakly interacting gravitational theories in a lower dimension, theories that are rendered precise by the mathematical machinery developed by string theorists around the world.

While the origin of this linearity in temperature and field remains to be determined, one thing is certain: the fact that many of these strange metals are also the highest temperature superconductors within their class only makes the drive to understand such behaviour far greater than a desire to rewrite the condensed matter textbooks.

Part of this work was funded by the European Research Council (ERC) under the European Union’s Horizon 2020 research and innovation programme (grant 835279-Catch-22). 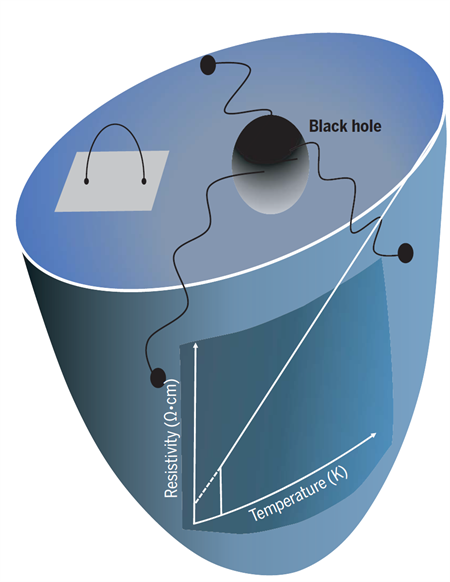 Conceptual connection between the ‘strange metal’ phase of a strongly interacting quantum mechanical system and the physics of black holes and curved spacetime, as described by string theory. The picture illustrates the emergence of a robust linear-in-temperature resistivity from the event horizon of a black hole.