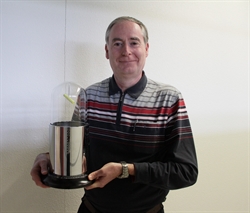 On Wednesday 28 September Wim Beenakker received the WiNSt Education Award for Physics and Astronomy 2022. The president of Marie Curie, Lina Posma, presented the award with the following speech.

During this opening of the academic year, the education award winner will be announced. This award, given out on behalf of all the Physics and Astronomy students is for a professor that made a really good impression last year; a professor whose teaching got a lot of positive responses.

The professor that won the award this year, teaches quite difficult master’s courses, but students say that he explains it very well and makes it understandable. Every student I have spoken to about him, told me that he is extremely enthusiastic, which makes it easier to stay focused during the explanation of the difficult math taught in his courses. Because of his passion for the subject matter, students seem to understand the theory better. And by better understanding the subject, they begin to share the enthusiasm of this professor, which I think defines what an excellent teacher is.

Furthermore, this professor is genuinely invested in making the students actually understand the subject matter and not only know the facts without understanding any underlying theory. This is not only seen in his lectures, but also in his methods of testing the subjects. For instance, in his exams, you really need an understanding of the matter to be able to answer the question. In the oral exams he takes, he also gives some helpful hints and makes the students come up with the correct answer themselves. Students appear to even get a better understanding of the subjects during their orals. This shows that this professor thinks well about the best way to make the students understand the subject matter. His lectures are also arranged in the best way to teach the matter to the students and they are didactically very well prepared. The lecture notes he uses for his courses are known to be good and very detailed, which is received highly positive by the students.

Besides his great lecturing, he is also very willing to answer any arisen questions and he can give a clear and detailed answer. It shows that he knows a lot about his research and that he can clarify questions about it very well. Not only his informative skills are quite well received by the students, but also his social skills. Students say that he is a humorous man who includes jokes in his lectures, which makes you less likely to get distracted during the lecture. Outside of his lectures, he also likes to make a lot of funny jokes and students say he is a nice person to talk to. Even in his free time or for example after a lecture, he is very happy to talk with students.

So, there are a lot of positives about this professor and as you may have guessed already, this professor that I’m talking about and that hence won the education award… is… Wim Beenakker! He teaches Quantum Field Theory and keeps students attentive during his lectures through his structured and clear explanation, but also through his energy and enthusiasm for the subject matter. Students who have taken lessons from Wim, were very positive about him and his way of teaching. So, on behalf of all Physics and Astronomy students, I want to congratulate Wim Beenakker on winning the education award for Physics and Astronomy.

We as High Energy Physics colleagues, congratulate Wim with this great award.